Test Taking as a Study Tool

No one likes taking tests. But research has continually demonstrated that it is test taking, not reading or trying to memorize, that produces the best outcomes for students. In a keynote presentation to The Association for Psychological Science convention in May, Dr. Henry L. Roediger, III of Washington University's Memory Lab addressed this issue in a talk entitled "The Surprising Power of Retrieval Practice in Improving Retention: From the Lab to the Classroom." 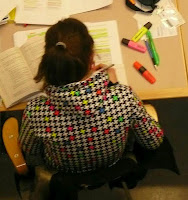 As reported in Education Week, Professor's Roediger's research team has found that testing itself, ideally from five to seven "retrieval sessions," seems to enable students to really understand a particular concept. The process of taking a quiz or testing yourself on material actually transforms your understanding of the material, according to Professor Roediger, and that means that you will do better on future tests than if you simply memorized the material for a single upcoming test.

Other researchers whose work was presented at the conference had similar findings.

Dr. Jeffrey D. Karpicke of Perdue University presented the results of a study of college students asked to use various methods to learn science material. Those who quizzed themselves did roughly ten percent better on all kinds of questions than those who read the material repeatedly and even those who created concept maps of the material.

Here at The Yellin Center we often recommend that students create tests -- by themselves or in a study group -- as an important part of their studying process.