There has been a good deal of newspaper coverage recently on  the use of e-cigarettes, particularly the JUUL brand, which is shaped like a USB flash drive and is popular among teens. Like other e-cigarettes (also called vaping devices), these are battery powered and heat a liquid containing nicotine to produce an aerosol that is inhaled by the user.

Why the focus on JUUL? As explained by Dr. Howard A. Zucker, the New York State Health Commissioner, in a recent communication to health care providers throughout the state, this brand of e-cigarettes is almost odorless and is small enough to be used discretely almost anywhere. Students have been reported using them in school bathrooms (no surprise there) and even in classrooms and hallways. The liquid in JUUL devices is contained in a small pod, each of which may have the same amount of nicotine as a pack of cigarettes. What makes JUUL especially attractive to teens is the flavoring added to the liquid in the pods. These flavorings -- by some counts as many as 15,000 different ones, including fruit and candy flavors -- are highly appealing to young users.

What these young users don't consider is that no matter what flavor they may choose to use, each pod of liquid also contains nicotine, which is highly addictive. As Dr. Zucker notes, nicotine in any form can impair adolescent and young adult brain development, particularly those functions affecting impulse control, mood disorders, and attention and learning. Furthermore, while the vapor from the e-devices seems to be just harmless water vapor, it actually contains toxic chemicals and ultra-fine particles that enter the lungs.

Some adults have noted that all e-cigarettes can be used to help smokers quit, but evidence has shown that many adults use both regular cigarettes and e-cigarettes in different situations. There can, however, be no question at all that e-cigarettes pose a danger to young people and that parents need to be aware that they are not just a harmless fad or novelty device. They are a gateway to smoking cigarettes and they are a danger on their own.

Current data from the CDC on smoking and its effects on health is something to share with your teen. As the CDC notes, each day, more than 3,200 people younger than 18 years of age smoke their first cigarette and, each day, an estimated 2,100 youth and young adults who have been occasional smokers become daily cigarette smokers. Your pediatrician or family doctor can be a valuable resource on both the dangers of e-cigarettes and smoking and ways to help users quit.
Posted by Yellin Center for Mind, Brain, and Education at 11:00 AM No comments: Links to this post

Today's New York Times has an excellent article on college readiness and what happens to many students who are not prepared for college, noting that almost one-third of students won't continue in college for their sophomore year and that only slightly more than half of students will graduate within six years (No, that's not a typo. Six years is the "new" four years). 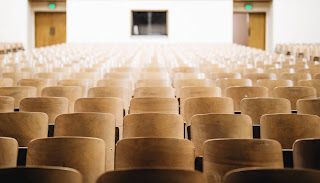 As the authors note,  "...many teenagers go away to college only to recognize — either because of their grades, their habits, their mental health or all of the above — that they’re not ready for college life." The Times piece cites two primary factors in college failure: the nature of college itself, with poor sleep patterns, lousy diets, and the easy availability of liquor and drugs; and the fact that many students haven't had opportunities to manage their own lives in a way that would prepare them to handle the personal and academic demands of college.

Notably, while the Times piece mentions students with emotional and executive function difficulties, it does not discuss students with previously diagnosed learning and related disabilities. For these students, there are additional complexities involved in arranging and using the accommodations and supports they need.

We've addressed many of these issues before in this blog, and you may want to take a look at some of these past posts once you have read the Times piece. They include:

Choosing the College that Fits

Things to Consider When Heading to College

How to Head Off Academic Trouble in College (in retrospect, perhaps doesn't say enough about fostering student independence)

Other suggestions are set out in your blogger's book, Life After High School -- especially the final chapters dealing with medication and managing the distractions of college life.

Photo by Nathan Dumlao on Unsplash

Posted by Susan Yellin, Esq., Advocacy and Transition Services at 10:41 AM No comments: Links to this post

This seems to be a year when seasons and holidays sneak up on us. Just yesterday, we were hit with the first blast of snow here in New York, snarling roads and surprising even the weather forecasters with its intensity. Next week is Thanksgiving, occurring on the earliest possible date, given the federal law that requires it to be on the fourth Thursday of November.

Among the many special things about Thanksgiving are that it has always been notable for its message of  friendship and inclusion and that it is celebrated by all of the cultures that make up the American melting pot. If your family tradition includes sharing books with the children at your Thanksgiving dinner (and if it doesn't, it might be a good year to start), there are a few books you might want to consider.

We Are Grateful: Otsaliheliga is a new picture book that was written by a member of the Cherokee Nation. It looks at how the Cherokee people express gratitude -  otsaliheliga (oh-jah-LEE-hay-lee-gah) - throughout the year in their celebrations and ceremonies. 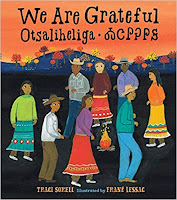 If your family likes the Macy's parade, they might especially enjoy reading about how it got started, in  Melissa Sweet's , Balloons over Broadway: The True Story of the Puppeteer of Macy's Parade, which tells the story of the parade and the man who began the tradition in the 1920s (ages 4 and up).

Other good choices for the children at your celebration include:

The Pilgrims' First Thanksgiving by Ann McGovern(ages 4 and up)This classic chronicles the struggles of the pilgrims during their first year at Plymouth Colony, their friendship with Native Americans like Squanto, and the first, three-day long Thanksgiving celebration. 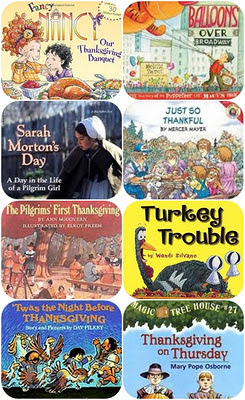 (ages 4 and up, and older kids can read this on their own)Fancy Nancy helps her family prepare for a fantastic Thanksgiving meal, with all her usual flair. Comes with stickers!Turkey Trouble  by Wendi Silvano(preschool - 3rd grade)A terrified turkey attempts to disguise himself to avoid becoming Thanksgiving dinner in this silly story, complete with a happy ending.'Twas the Night Before Thanksgiving by Dav Pilkey(ages 4 and up) In this zany rewritten version of ’Twas the Night Before Christmas, children on a school field trip to a farm are troubled to learn about the impending fate of the turkeys they meet there. This funny story, full of Pilkey’s trademark humor, is sure to please both kids and parents. Thanksgiving on Thursday (Magic Tree House #27) by Mary Pope Osborne(ages 6 and up to read on their own)Jack and Annie travel back to the first Thanskgiving Day in 1621, where they learn about life in Plymouth. Little Critter: Just So Thankful by Mercer Mayer(ages 3 and up)Although Little Critter is initially jealous of the kid down the street who seems to have everything, he learns that there is much to be thankful for in this charming book Sarah Morton's Day: A Day in the Life of a Pilgrim Girl, Samuel Eaton’s Day: A Day in the Life of a Pilgrim Boy, and Tapenum's Day: A Wampanoag Indian Boy In Pilgrim Times, by Kate Waters(ages 4 and up; students in grades 4 and up can read it on their own)  Through a series of photographs taken in a recreated colony, Waters teaches about the lives of the Pilgrims and the Native Americans.

We hope you enjoy sharing these books -- and being together with family and friends. Happy Thanksgiving!


Posted by Yellin Center for Mind, Brain, and Education at 11:36 AM No comments: Links to this post

Earlier this week, we shared information about scholarships available to students with learning and other disabilities. But the number of such scholarships is very limited, and most offer just a small part of the expenses a student and her family will face in college. Of far more importance is the financial aid offered by individual colleges, and the way to obtain such aid is by filing a FAFSA application.

FAFSA - the Free Application for Federal Student Aid -- is used by virtually all colleges and universities to determine whether a student qualifies for financial aid and to calculate the amount of aid each student needs. In addition, the information on the FAFSA is sent to the higher education agency of your home state and those states in which the schools you are applying to are situated. This information is used by the states when they distribute state financial aid money.

Until a couple of years ago, filing a FAFSA form posed a dilemma for most families. The form had been available each January, but it required the tax information from the tax forms that weren't due until that April. In fact, many families not only had not prepared the forms the FAFSA sought, but had not yet received the underlying tax information that they would need to complete those forms.

This dilemma was resolved beginning with the 2016-17 school year. Now, FAFSA forms are available as of October 1st each year, and the tax information required is for the preceding tax year. So, for example, for students planning to begin college in the fall of 2019, the 2019-20 FAFSA became available on October 1, 2018 and is due by by June 30, 2020. Of course, you will want to file as soon as possible (if you have not already done so). In addition to needing to know what you will be receiving before you begin college, funding is always limited and students who file earliest will have access to a bigger piece of the funding pie.

What makes it possible to have this earlier deadline is that the tax information that must be submitted is now from the prior tax year. This means that applicants submitting on or after October 2018 should submit their family tax returns from 2017, which were generally due in April 2018 and should be readily available. 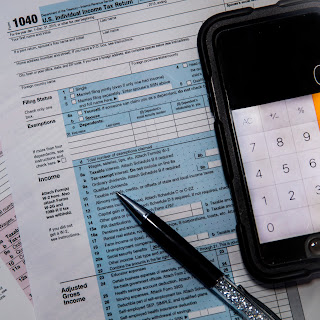 The best place to get all the information you need about the FAFSA is the official FAFSA website. You can also find helpful discussions of specific topics related to your FAFSA application on the U.S. Department of Education blogs.

Posted by Yellin Center for Mind, Brain, and Education at 12:01 PM No comments: Links to this post

Scholarships for Students with Learning Disabilities

Posted by Yellin Center for Mind, Brain, and Education at 9:33 AM No comments: Links to this post