Next week marks the 40th anniversary of Title IX, the Education Amendments Act of 1972 whose key language provided that " No person in the United States shall, on the basis of sex, be excluded from participation in, be denied the benefits of, or be subjected to discrimination under any education program or activity receiving Federal financial assistance..." 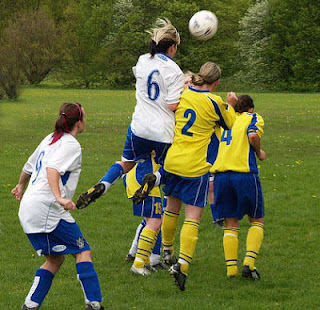 Since it was signed into law on June 23, 1972, Title IX has transformed the landscape for women's education and women's sports, providing for such sweeping changes as the formation of women's sports teams, and the right of pregnant girls and women to remain in school. The law does still permit single sex schools and colleges, so long as public schools do not use them to limit access to programs to only one gender, such as having special math or art programs only available to students in a single sex school.

The protections of Title IX have not been enjoyed equally by all women. A recent New York Times article points out that women of color in sports still face challenges in reaching equality in athletics and that white girls participate in high school sports at higher rates than other groups.

Still, the progress under Title IX has been substantial in the last 40 years. One place that is celebrating these decades of growth for women is the Charles M. Schulz museum in Santa Rosa, California, which is running an exhibit called "Leveling the Playing Field" which celebrates the athletic exploits of Schulz's comic strip girl characters in sports from football to figure skating. It turns out that Schulz was very impressed by tennis great Billie Jean King and was inspired by his friendship with her to create a series of strips celebrating women in athletics. They certainly make a point, and are sure to bring a smile as well. Take a look for yourself.

Photo by Ingy via Flickr Creative Commons
Posted by Yellin Center for Mind, Brain, and Education at 3:30 PM