Linking the Mind and the Brain 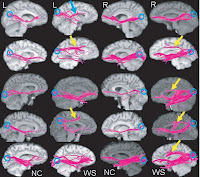 A fascinating blog post by the Director of the National Institute of Mental Health looks at the interaction of the brain -- its structures, functions, and malfunctions -- and the mind -- the way we think, behave, and feel.

Dr. Thomas Insel notes that advances in imaging and other related techniques allow us to look beyond lesions in the brain, which cause such illnesses as Alzheimer's and Parkinson's diseases. Researchers can now use tools such as functional MRIs, PET scans, and advanced EEGs to examine the circuitry in the brain and to study patterns of cortical function that are present in such conditions as ADHD (attention deficit hyperactivity disorder). As Dr. Insel states, "For the first time, we can study the mind via the brain."

Using the example of ADHD, Dr. Insel discusses how a condition which is generally described by its impact on behavior (hyperactivity) and cognition (attention) appears to be related to delayed cortical maturation. Likewise, research has indicated that serious depression seems to have "biomarkers" in the brain that may yield possible pathways to new treatments.

Understanding the brain functions and structures that underly conditions such as ADHD or depression is the first step to coming up with new and effective forms of treatment. It also allows for the exciting -- and as yet unrealized -- possiblity of prevention and early intervention to prevent the cognitive, social, and emotional difficulties that are the consequences of disorders of brain circuitry. We are certainly not there yet, but Dr. Insel has provided a tantalizing glimpse of the future.

Photo used courtesy of NIMH
Posted by Yellin Center for Mind, Brain, and Education at 10:06 AM