Fun for the Fourth!

Here in New York City, when the public schools don't let out until June 30th, the Fourth of July can tend to sneak up on folks. If you haven't made plans yet for this long holiday weekend, it's not too late to find terrific ways for your family to commemorate our nation's 240th birthday and to celebrate summer. Here are some ideas:

Founding Fathers
The New York Historical Society will kick off its "Summer of Hamilton" celebration on Monday, July 4th, with activities for the entire family. Kids will get to meet "Alexander Hamilton" and ask him about his fascinating life. Admission is free on the 4th for those 17 and under.

If you are feeling lucky, you can always enter the lottery for $10 tickets (limit 2 per entry) to the Broadway blockbuster Hamilton. The odds of winning are absurdly low; the producers advise that there are more than 10,000 entries for each lottery, but someone has to win...

You can also visit the National Park Service museum at Federal Hall, which sits on the site where George Washington took the oath of office as our first President, and which served as home to the first Congress, Supreme Court, and Executive Branch offices when New York was, briefly, the capitol of our country.

And, if you can't locate the terrific 1972 film 1776 in your local broadcast listings, you can stream it from Amazon. Singing founding fathers give real insight into some of the issues facing the Continental Congress on that steamy July in Philadelphia.

Music
If your idea of celebrating includes music, there are performances at South Street Seaport, including family entertainment on the Peck Slip Stage from 1-8 pm.

Brooklyn's newly opened Amphitheater at the Coney Island Boardwalk is featuring the Beach Boys. It's the perfect music to listen to at the beach on a summer evening.

Parades and More
During the American Revolution, 9000 English troops landed on Staten Island. Islanders, being content with their lives under British rule, supported the Loyalists’ cause. One contingent of Loyalist troops was camped in New Blazing Star. It was here on August 22, 1777, that a major skirmish on Staten Island between General George Washington’s Patriots and General William Howe’s Loyalists was fought. This part of the island is now known as Travis and has been holding a Fourth of July parade since 1911.

And, of course, there will be a fireworks display over the East River, visible from many areas of the City, beginning just after dark.

However you decide to spend the holiday, we wish you a fun, safe, celebration! 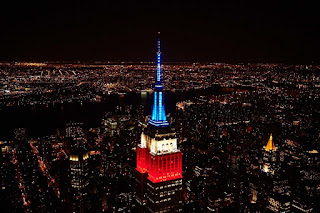 Posted by Yellin Center for Mind, Brain, and Education at 12:00 PM