"Early to bed and early to rise, makes a man healthy, wealthy, and wise".
Benjamin Franklin 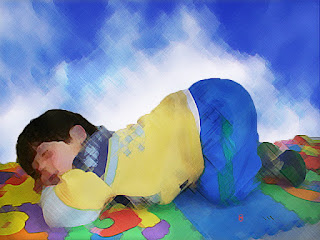 We've written numerous posts on the importance of sleep, but newly reported research adds an interesting perspective to this subject. A study in The Journal of Pediatrics found a correlation between late bedtimes (after 9 p.m.) for preschool children and obesity rates for these children when they reached the age of 15.

The researchers looked at almost 1,000 healthy youngsters with an average age of 4.7 years in 1995, examining such aspects of their lives as their bedtimes and the kind of interactions they had with their mothers, something called "maternal sensitivity". These same children were followed by the research team and their BMI (body mass index, a measure of obesity) was determined when they were 15 years old.

The study team found that those teens whose parents reported the earliest bedtimes (8 p.m. or earlier, comprising one-quarter of the group) had a rate of obesity of 10 percent. Those teens who had bedtimes as young children between 8 and 9 p.m. (one-half of those studied) had an obesity rate of 16 percent. And the one-quarter of teens who had the latest bedtime as young children (after 9 p.m.) had an obesity rate of 23 percent. These findings were not related to maternal sensitivity and were independent of socio-economic status and maternal obesity.

These obesity rates do not imply causality and the authors did not examine why a later bedtime was linked to higher obesity rates. They did suggest that an earlier bedtime in childhood was one thing parents could do to help their children to become healthy teens.

Posted by Yellin Center for Mind, Brain, and Education at 11:14 AM