Parents of students who receive services under the Individuals with Disabilities Education Act (IDEA) are aware that this federal law requires that their child receive a free, appropriate, public education, universally referred to as FAPE. But just what is considered appropriate has been the subject of litigation almost since this law was enacted in its earlier form (under a different name) in 1975.

The prevailing standard for "appropriate" was articulated by the Supreme Court of the United States in 1982 in the Rowley case, which we examined in this blog more than six years ago. As we noted at that time, the Court set the standard for appropriate far lower than parents and their supporters would have wanted, stating that the IDEA required only:

"...personalized instruction with sufficient support services to permit the child to benefit educationally from that instruction … and should be reasonably calculated to enable the child to achieve passing marks and advance from grade to grade."

Over time, the Rowley standard has been subject to interpretation by courts throughout the country and the federal Circuit Courts of Appeals, whose decisions are subject to review only by the Supreme Court, have diverged in their views about what constitutes an appropriate education.

Now, a case is being considered for review by the Supreme Court from the United States Court of Appeals for the Tenth Circuit, which affirmed the decision of a lower court that providing "some" educational benefit to a Colorado student with autism was sufficient to meet the standards required for FAPE. The Supreme Court has asked the Obama administration's representative, the U.S. Solicitor General, to weigh in as to whether the Court should take on this case. 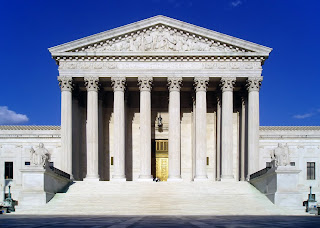 The question posed by this case is described in the amicus brief  filed by Autism Speaks, which urges the Supreme Court to consider it:

"Some circuits require a substantial educational benefit (often described as a “meaningful” one) while others ... require only a just-above-trivial educational benefit. [Supreme Court] review is necessary to resolve the conflict over an issue of paramount importance to children with disabilities, their parents, and their school districts."

The problem, as the amicus brief notes, is  "that the just-above-trivial educational standard adopted by the Tenth Circuit ... and by other courts of appeals, is not reasonably calculated to meet the educational needs of children with disabilities, and therefore impairs their access to an education and opportunity for independence and self-sufficiency."

We will continue to follow this case and to see if the U.S. Supreme Court decides to grant a writ of certiorari and accept this case for review.

Posted by Susan Yellin, Esq., Advocacy and Transition Services at 10:37 AM