Awards: Princess Academy was named a Newbery Honor Book in 2006.

Plot: Fourteen-year-old Miri is a misfit in her beloved mountain town. The people of Mount Eskel, home to 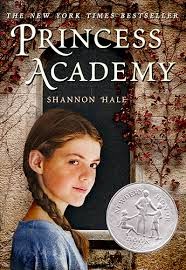 generations of quarry workers, are strong, hearty folk. But Miri is too small to work in the quarry, and although she is treated well by her widowed father, sister, and community, she longs to contribute something of value. Miri gets her chance to show just how valuable her qualities are when a messenger from the king surprises the town with an announcement: The nation’s priests have prophesied that the next queen of the Danland will be a resident of Mount Eskel and each girl must be trained to be the next princess, just in case she’s the one the prince picks. The teenage girls are whisked away to a Princess Academy where a harsh mistress rules with an iron fist. At the academy, Miri’s intellect is as laudable as her massively strong friend Frid’s muscles were back in the quarry. Many of the girls are sure the prince will choose her. But along with exciting possibilities come uncomfortable questions. Does Miri want to live among lowlanders, people whom she has been raised to despise? Her new friend Britta, an orphan from the lowland who studies alongside Miri at the academy, dispels many of Miri’s beliefs about the superiority of mountain folk. Does she really want to marry the prince, a boy she’s never even seen? Stirrings of affection for her childhood companion Peder feel like more than friendship. And could she really ever leave Mount Eskel, a place she does not fit in but loves anyway? Adventure, humor, and wisdom abound in this refreshingly original book. And we wager that you won’t see the ending coming!

Our Take: The title of this book brings to mind pink gowns and sparkling tiaras, but many girls will be delighted to discover that this tale is far from fluffy. Miri displays the kind of grit, courage, and cunning not usually associated with syrupy princess stories. The plot structure, like the storyline itself, is unexpected in this gem of a book; just as it seems things have settled into a comfortable resolution, another unexpected surprise presents itself. Hale has managed to weave a tale that is at once fast-paced and introspective. The language is lovely, and the multi-layered tale ensures that there’s something for just about every reader.