Here at The Yellin Center, we've got math on our minds. While it seems that a great deal is known about what happens in the brain when people process language, comparatively little information exists about the way the brain conceptualizes numbers and amounts. So we've been reading new studies about the brain and numbers with great interest and are expanding our knowledge about what “number sense” actually is, how automaticity in number recognition impacts math performance, and the very real problem of math anxiety. 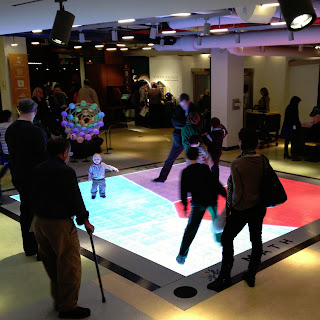 With all this background, we were especially excited to visit Museum of Mathematics, or MoMath, which is just a few blocks away from our learning center! Mo Math is the brainchild of Glen Whitney, a former math professor who now serves as the museum’s president. The museum, which focuses on abstract concepts without much emphasis on numbers, is the only math museum in the country according to the New York Times. It opened its doors for the first time on December 15, 2012, and has received rave reviews from visitors ranging from preschoolers to Ph. D. candidates.

According to its mission statement, the museum “illuminates the patterns that abound in our world.” Its exhibits are dynamic and are intended to spark visitors’ curiosity, inspire them to ask questions, and reveal the fascinating side of a subject many people find dull, obtuse, or downright scary. Whitney hopes to dispel myths that math is hard or boring with beautiful, exciting exhibits that may inspire some visitors to take a second look a at subject they thought they had pegged.

If our observations there were any indication, Whitney has met his goal and then some. “On a scale of one to ten,” we heard a father asking his family as they exited the museum, “what would you rate this place?” “Ten!” called out a boy who looked to be about eight. “Twelve!!” his older brother yelled. Everywhere we looked, children and adults alike were intent on riding square-wheeled tricycles (that actually work!), creating patterns with tessellation tiles, solving wooden puzzles by detecting patterns, jumping around on a dance floor-like space that lights up, and adjusting lengths of track to make a toy car race along it as quickly as possible. One of our favorite exhibits was a calculator that was two stories high and made of string; we enjoyed figuring out how it worked (but we won’t give away the secret!). Who’d have thought this level of engagement would exist at a museum? About math? 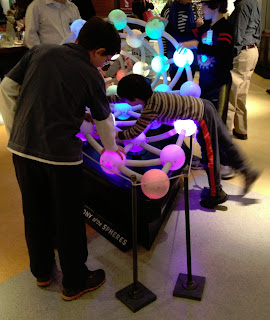 We thought we detected a caveat for a while; the museum was seriously lacking in meaty, mathematical explanations for the phenomena we were observing. Touch screens are available near many exhibits with explanations, and we could choose how detailed we wanted the explanation to be. But even the most in-depth explanations were pretty abstract, and this caused lots of fervent discussion within our group about the cold, hard data that would explain what we were actually seeing. Suddenly, it seemed that perhaps sparking this kind of discussion was the whole point. And the children around us were too busy having fun with rolling shapes and scattering light waves to miss the numbers.