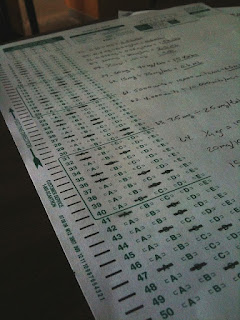 Most of us have been there: butterflies in the stomach, clammy hands that tremble, difficulty breathing. Test anxiety is all too familiar to most of us. A recent article in The New York Times by Po Bronson and Ashley Merryman (also authors of Top Dog: The Science of Winning and Losing) explores why some kids (Warriors) seem to approach exams with cavalier nonchalance while others (Worriers) are seized with paralyzing stress. Of course, human behavior is influenced by a multitude of factors, but there’s also a compelling genetic explanation for this phenomenon. When a person experiences stress, the prefrontal cortex of his/her brain is flooded with the chemical dopamine. Because our brains work best when dopamine levels are controlled, the gene responsible for clearing that dopamine, a gene called the COMT gene, sets to work to restore balance. COMT, however, comes in two varieties. The first clears the dopamine slowly. The second clears it rapidly. Those who have the rapid removal version of COMT, Warriors, tend to perform better under stress. Worriers on the other hand, whose brains seem to become saturated with dopamine, often experience a drop in performance.

Here’s the part that makes this seem particularly unfair to Worriers: A slow-acting COMT gene is typically associated with higher cognitive and executive function skills. So students with higher cognitive abilities who sit down to a test are at a larger disadvantage than their less academically able classmates. The Times articles notes that a study in Taiwan demonstrated that students with higher IQs coupled with the slow-removal gene under-performed their fast-acting COMT-endowed counterparts on a high-stakes national exam.

This seems like bad news for Worriers, but, happily, there is hope. Studies of stress indicate that, like much else in life, the spin we put on a situation has an enormous impact on the way we deal with it. According to the authors, both amateur and professional athletes have been found to experience the same levels of stress before competition. The difference? The amateurs view stress as a derailing force while the professionals view it as an energizing one. The article notes that a study at Harvard put this principle to the test in an academic setting. Before taking a practice test, some students were given a statement explaining to them that stress actually improved test performance. Not only did that group out-perform the control group on the practice test, but they attained higher scores again when they took the actual GRE weeks later.

Part of managing test anxiety, then, is a matter of philosophy. The other comes with good, old-fashioned practice. The authors advocate “training, preparation, and repetition” as the best way to prepare Worriers for a stressful event. Here are some of our ideas for combating test anxiety, whether you’re coaching a student in your life, or yourself: