The Crucial Role of Recess

The American Academy of Pediatrics (AAP) has just issued a Policy Statement, reaffirming what researchers have noted for years -- that recess plays a crucial role in the well-being of children and that cutting recess time in an effort to devote more of the school day to academics is a short-sighted practice, which can deprive students of significant physical, social, and academic benefits.

The Statement, issued by the AAP Council on School Health notes that recess is different from physical education, which it describes as an "academic discipline", and stresses the need for unstructured playtime. The Statement notes that  students are able to perform better on cognitive tasks after a period away from the  classroom, and that what matters most is that students get a break from academics, not what they do during this break or even how long the break lasts. 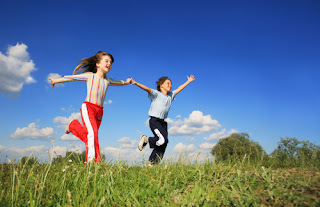 Social benefits to recess include building skills such as cooperation, negotiation, sharing, and problem solving. There are physical benefits, as well, even for those students who are not particularly active on the playground; they are still moving more than they would at their desks. The AAP notes that while there is much discussion about structured play time and playground safety, too much supervision and structure can impede spontaneous play and creativity. They note that while supervision is important, there needs to be a balance so that recess is really a time for play. They also note that while students traditionally have recess time after lunch, that there is merit to the "recess before lunch" movement. When students get to play before their lunch period they take more time to eat, waste less food, and their behavior is improved both at mealtime and after lunch.

Posted by Yellin Center for Mind, Brain, and Education at 4:23 PM