Health Benefits of Dogs and Dirt 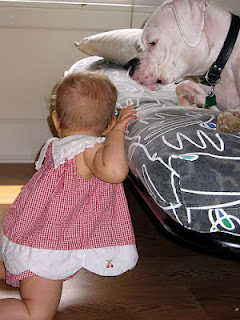 A study of almost 400 infants in Finland has demonstrated the positive impact of early exposure to dogs on the health of the children. The study, just published by the journal Pediatrics, found that children with dogs at home had fewer repiratory or ear infections and needed fewer courses of antibiotics than children who had no exposure to dogs.

Further, the study determined that the greatest positive impact occurred when children were exposed to dogs that spent a significant part of their day outside of the house. The authors note that this might be due to the increased amount of dirt brought into the home by dogs who spend much of their time outdoors. They state, "In other words, less dirt is brought indoors by dogs who live mainly indoors". The study noted some positive impact for exposure to cats, but not as significant as that for dogs.

Another recent study, this one using mice, looked at the impact of a germ free environment and found a negative correlation between such an environment and tolerance of cells to conditions such as asthma and inflammatory bowel disease. The authors conclude that early exposure to microbes is critical for building tolerance to later disease exposure.

Parents who are concerned about having pets around young children and keeping their kids away from dirt should be heartened to learn that both dogs and dirt can be beneficial to their childrens' health.

Photo by Aaron E. Silvers via Flickr/Creative Commons
Posted by Yellin Center for Mind, Brain, and Education at 3:05 PM