We are frequently asked whether it is really necessary to take attention medications every day. Some students feel that they only need their meds when they have a major project, important test, or heavy workload. Many parents like to give their children a “break” over the weekend or during vacations. I believe that deciding whether and how to take medications is a personal decision best made in consultation with the prescribing physician. But making a wise decision requires the best information so each of us can weigh the potential benefits and risks in the context of our own lives. With that in mind, I think it is important to share interesting research that was published in the April 2012 edition of the Journal of Clinical Psychopharmacology in a study called "Long-Acting Methylphenidate Reduces Collision Rates of Young Adult Drivers With Attention-Deficit/Hyperactivity Disorder" (by Cox, Daniel J. PhD; Davis, Margaret BA; Mikami, Amori Yee PhD; Singh, Harsimran PhD; Merkel, Richard L. MD, PhD; and Burket, Roger MD). 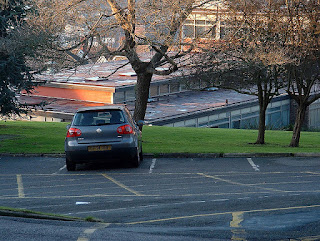 The investigators studied adolescents diagnosed with ADHD who had previously responded to medication, were not routinely taking medication, and were active drivers with more than one collision or citation in the past two years. Half of the participants received long-acting stimulants; the other half did not. Their driving was monitored for three months with in-car video cameras. (You are probably wondering how you can get a hold of one for your own adolescent driver). Compared to the untreated group, the group receiving medications had fewer video-documented collisions and “problematic driving events.” So, when making decisions about risks and benefits of attention medications, bear in mind that academic performance may not be the highest priority.

Photo by Dominic Alves via Flickr/Creative Commons
Posted by Paul B. Yellin, MD, FAAP at 11:54 AM