There has been much news of late about the state of education in New York City’s public high schools. We had an extraordinary opportunity to see one of the new, small high schools in action last week and were impressed with both the students and staff we encountered.

Hillside Arts and Letters Academy (HALA) is a small school, in its second year of operation, located in the Jamaica High School building in Queens. HALA has approximately 200 students, divided between 9th and 10th graders, and will eventually grow to a four-year student population of roughly 400. The principal, Matthew Ritter, was previously Assistant Principal at Bushwick High School for Social Justice in Brooklyn, and has recruited a team of teachers who share his vision of an arts based curriculum for college bound students. For full disclosure, one of the HALA teachers is Matt Yellin, who has been a guest writer and a featured subject of this blog. 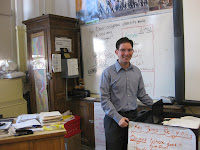 Our visit came on Portfolio Day, when each of the students presented several pieces of their work to their classmates and outside adults – parents, community members, and volunteers. These presentations were part of the project based learning that is a key part of the school’s approach. Each student shared a letter about themselves, their learning experiences, and their plans for the future. They then presented their selected work – a packet of math problems, an essay about the development of different religious beliefs in Asian cultures, a work of art, a poem. They explained why they selected a particular project to represent their work over the past semester and responded to questions from both their classmates and adult visitors.

We were struck by the insight even the shyest students had developed about themselves as learners and what they would need to do to meet their academic and future goals. We thought the quality of the work they presented was strong, but it was the informal interactions we had during the day that were, perhaps, the most impressive aspect of our visit. The administrators we met were aware of every aspect of the school and their commitment to excellence was clear from their focus on how the students were doing and what the school could do better. The teachers we spoke to were serious about their dedication to their students and to project based learning. Students were lively, but unfailingly respectful to each other and to adults. They spoke about how they were glad to be there and how they had come to understand what they needed to do to succeed in school and in life.

Our visit to HALA was a snapshot of one day in the building of a school, and we know that creating a new school is a complex process, one that is complicated by co-location in a large building which has other new schools, the number of English Language Learners, and the reliance on testing as a measure of a program which seeks to build a real understanding of learning concepts. Still, we came away with a sense of optimism about what can be accomplished by a dedicated team in a small public high school, and look forward to returning to HALA next year to see their progress.
Posted by Susan Yellin, Esq., Advocacy and Transition Services at 9:13 AM