Our guest blogger today is our favorite student at the Harvard Graduate School of Education, Matt Yellin. 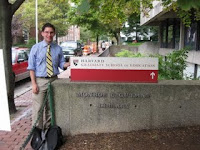 As a graduate student preparing to become a high school history teacher, I spent the past week visiting different high schools around New York City, focusing on those that I had been told were particularly successful at educating low-income students. I entered the exercise with two goals: as a student of education, I wanted to understand a little better what makes a school function well, especially when that school is educating students who all too often have been neglected or poorly served by our school system; and I wanted to gain a better understanding of where I might want to teach in the coming year.

I saw many different types of schools, and even found huge variations within individual schools. While all the schools I saw deserve to be called “good” by some standard, they all met very different definitions of good schooling. Some schools appeared very focused on discipline, control, and raising test scores. Certainly, these schools often appear statistically to be most impressive, at least in terms of scores on state-wide tests. Other schools were much more "laid back".Students called teachers by their first names, tests were rarely given or prepared for, and students picked their own topics of study. In both types of schools, real learning was going on and students were finding success—a far cry from the stereotypes of schools in struggling neighborhoods.

Seeing these “successful” schools, though, forces someone who cares about education to really confront what it is that they value. Do we owe students the chance to do well on their standardized tests? Perhaps, although some would say this stress on achievement misses the real point, something one of my education professors calls attainment (SAT scores, recommendations- i.e. a successful college application rather than simply meeting the minimum diploma standards). Conversely, do we not do better by our students by respecting them, putting them in charge of their own learning, and giving them chances to think critically? Again, though, we cannot value this without compromising something- some would argue, discipline and test preparation.

While I came to this endeavor as a teacher trying to figure out, philosophically, what type of educational goals I want to help students pursue, for parents participating in the complex system of applying to high school in New York the choices force you do weigh the same values, though schools sometimes try to gloss over them. Looking at a school, you need to first figure out what you want for your child: order and safety, graduation, college acceptance, an open mind, a diverse peer group, and a positive social environment are all great reasons to go to a school, but being clear about which ones you hold most dear will make the school choice process far more successful for you and your student.
Posted by Yellin Center for Mind, Brain, and Education at 12:42 PM

Email ThisBlogThis!Share to TwitterShare to FacebookShare to Pinterest
Labels: teachers