In a recent blog, we wrote about a report from the Government Accountability Office that looked at how testing companies were complying with the provisions of the Americans with Disabilities Act (ADA). At that time, we noted that the one testing organization that did not participate in the interviews or provide written information for the report was the Law School Admissions Council (LSAC), which administers the LSAT, the test which accredited law schools use in their admissions process. 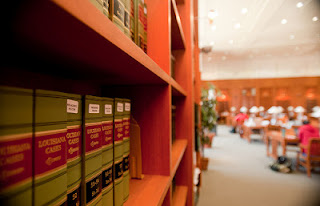 Now, the American Bar Association (ABA), with almost 400,000 members, has called for the LSAC to change its policies on dealing with individuals with disabilities and to bring its test into line with such other high stakes tests as the SAT, ACT, and GRE. What makes this American Bar Association resolution so important is that it comes from the organization that accredits law schools and that requires law schools to use an admissions test. Although the ABA does not control the LSAT, it tacitly endorses its use. Pressure for change from the ABA may prove the best hope for change in how the LSAT functions and may move the LSAC to comply with the ABA resolution that the LSAC ensure that, "the reporting of test scores is consistent for all applicants and does not differentiate on the basis that an applicant received an accommodation for a disability."

The ADA requires that all testing organizations provide individuals with documented disabilities with accommodations such as extended time, extra breaks, or auxiliary aids, which aids should "best ensure" that the test reflects the test taker's abilities and not his or her disabilities. But most of the high stakes testing organizations go further and report the scores of individuals taking their test with accommodations in the same manner as those who take it without accommodations; they do not "flag" a score as having been earned through "non-standard administration." That was not always the case, and only happened after settlement of a federal lawsuit in 2000 and subsequent action by testing companies. The SATs continued to flag scores for students who received test accommodations until 2003.

What has the American Bar Association and others concerned is that the LSAT -- along with the MCAT, the Medical College Admissions Test -- continues to flag scores of students who take their tests with accommodations, in contrast to every other major high stakes test. The LSAC has stated that they continue to flag because, "it would be misleading to report scores earned with additional test time without some indication of the non standard administration." They further note, that "scores earned with additional time are not comparable to standard scores," even though the other testing organizations have concluded that this is not the case with their tests.

As might be expected, there have been lawsuits against the LSAC and even agreements with the Justice Department, but no case has resulted in changes to the flagging policy. We hope that this welcome action by the American Bar Association will be key to changing the flagging policy for the LSAT.