In a blog post last year, I shared the reasons I did not allow laptops in the classes I taught at Brooklyn College.  Succinctly, taking notes on a laptop leads to less learning than taking notes by hand, according to research.  When we are able to record notes as quickly as they are spoken, our brains don’t have to process the information – it goes straight from our ears to our screens.  Recently, The New York Times published an update on this line of research, and I wanted to share some of this interesting information with our readers.  According to the Times article, which referenced a study by Sana, Weston, and Cepeda of McMaster and York Universities in Canada, it isn’t just the laptop users who suffer during lecture.  The researchers gave a lecture to a group of students, all of whom were taking notes on a laptop. Half of the students were also given twelve simple tasks to do while taking notes.  One task, for example, was looking up what was on television at a specific time that evening.  This was meant to approximate typical multi-tasking by college students, who are often on Google, Facebook, or Instagram while also trying to take notes during class. 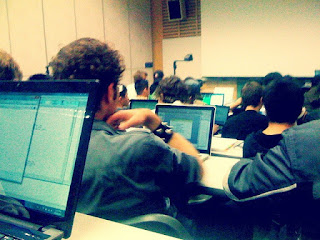 The results of the study are interesting and potentially alarming.  While it’s not surprising that the students who were given the distraction tasks recalled less from the lecture on a 20-question multiple-choice test, the more notable finding is that the students who were seated in view of the multi-tasking students also performed worse compared to students who were not multi-tasking and were not seated in view of a multi-tasker.  This spillover effect puts other students, not just the kids on Facebook, at a seemingly unfair disadvantage.  The study’s authors warn against a total laptop ban, however, noting that this would be “extreme and unwarranted.”

Sana, Weston, and Cepeda argue that rather than banning laptops completely, their use should be carefully curated so that students are not simply using them for note-taking, which studies have confirmed is detrimental to learning.  Rather, they recommend the use of web-based research, pop quizzes, online case studies, and discussion threads, all of which can “foster positive learning outcomes.”  They also recommend that instructors have an open conversation with students about the use of laptops in classes, and discourage their use when the technology is not a requirement for learning (e.g., slides are provided, textbooks cover all the information).  Finally, the authors note that instructors have the responsibility to build enticing, interesting classes that can compete with the allure of online browsing.  Inevitably, college students must be responsible for their own learning.  It is up to the instructors, however, to lead them in the right direction.

One important exception to discouraging laptop use was noted by the author of the Times article: students with disabilities who require laptops for note taking, to access lecture materials, or otherwise, must be permitted to use their devices in class. This can single out these students as having disabilities, but the author notes that it is a matter of weighing the needs and best interests of one group of students against those of others.