Today is September 11th and the horror and bravery of that date in 2001 and the days that followed has not diminished with the passage of 16 years. As we remember where we were on the date our city and our nation was attacked, and in many ways changed forever, we look back with excerpts from a post we wrote back in 2010.

Tomorrow is the ninth anniversary of the September 11th attacks, an event that has become associated with many things since that horrific day -- courage, loss, terror, war, and retribution -- just to name a few. We suspect that you have no trouble remembering where you were when you first heard the terrible news. We were all touched by this event. But for those of us in New York, Washington and  Pennsylvania, and especially for those whose loved ones were lost  in the towers or on the ill-fated planes, there was, and still is, a particularly personal resonance to the events of that day. 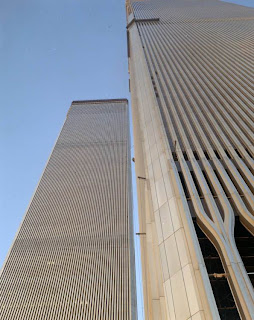 Some of you may have seen a hard-hat sitting on a shelf in Dr. Yellin's office. On September 11, 2001 Dr. Yellin was the Chief Medical Officer of  NYU Downtown Hospital, located just three blocks from the World Trade Center. He was attending a meeting in mid-town Manhattan, about three miles north, when his Chief of Nursing called his cell phone to report a fire at the World Trade Center. He promptly left his meeting and took a subway train downtown to the hospital, knowing that the hospital emergency response team would be moving into action, but completely unaware of the scope of the disaster. He emerged from the subway into streets of chaos, and got inside the hospital building just as the first of the towers fell. It was pitch black in the daytime, with a thick cloud covering the glass walled lobby. The hospital staff was geared up to deal with injuries and survivors, but there were only a handful of survivors in those first, awful hours. As the scope of what had happened became clear, teams of doctors, nurses, and support personnel  went to the remains of the towers to see what they could do. Dr. Yellin joined them for a time and was handed a hard-hat by a Con Edison worker; debris was everywhere.

Time became irrelevant. The mission to save survivors became one, instead, of serving the recovery teams and the local residents, who had no electricity or other services in what was, for many months, a disaster zone. Three days later, when Dr. Yellin made it home by train in a pair of dusty scrubs, people kept shaking his hand and thanking him. He knew that there had been far too little for him and his team to do on that fateful day.

Recalling the events of September 11th or seeing the devastation from the recent hurricanes can be unsettling for both children and adults. Our colleagues at the American Academy of Pediatrics' "Healthy Children"  website have helpful information about how parents can speak to their children about disasters of all kinds.

Photo: SMU University Libraries
Posted by Yellin Center for Mind, Brain, and Education at 9:00 AM