Keeping Guns Away from Children

Twice this past week, students in New York City public schools have brought loaded guns to school. The New York Times notes that these two incidents - one involving a 15-year-old student at an "early college" high school with a strong academic reputation, and one involving an 11-year-old elementary school student -- were two of four times this year where guns were seized in New York City schools. Last year, The Times reported, there were nine such episodes. These latest incidents resulted in the arrest of the 15-year-old and the arrest of the gun-owner grandfather of the 11-year-old.

As far back as 2011, we blogged about efforts by pediatricians to address gun safety by asking parents whether there is a gun in their home as a first step to beginning a conversation about ways to keep that gun away from children. We followed up in later blogs to discuss efforts to block even this basic step towards gun safety and can now report that the Florida ban on asking about guns in the home was upheld by the 11th Circuit Court of Appeals. A look at this decision in The Miami Herald lays out the history of this law. 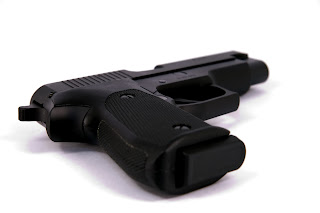 Let's pause for a moment to make it clear that we are not taking a stand on gun ownership. The issue of keeping guns out of our schools and out of the hands of kids is something else entirely.

Notably, neither of the schools in this week's events had metal detectors, which are common in many New York City public high schools and elsewhere. A report last September by WNYC noted that approximately 90,000 New York City public school students go through a scanning process each day. But there are real issues with metal detectors.  The likelihood of having to go through a scanner varies by borough, as well as by the racial and ethnic make-up of the student body. As the WNYC report noted, "getting scanned before school every day can mean earlier wake ups, long waits and lots of hassle." Having experienced scanning while visiting schools, your blogger can report that it is much like going through airport security every day. And while metal detectors and scanners may keep guns outside school buildings, they don't keep guns out of kids' hands elsewhere.

So, what can parents do to help make their children safer, in school and out? Our colleagues at The American Academy of Pediatrics have some common sense information and talking points about guns and kids that addresses families that have guns -- and those that don't. It includes statistics on how having a gun in the home affects family safety and questions to ask other parents before your child visits their home. It's worth reading.

photo credit: Ken via flickr cc
Posted by Yellin Center for Mind, Brain, and Education at 11:17 AM