Applying to colleges can be an overwhelming proposition for most students, but those hoping to play sports in college have an additional series of factors to consider. This is especially true for students hoping to play for universities and colleges known for their academic standards, which tend to allocate fewer resources to athletic recruitment. However, athletic skill can be powerfully influential in the admissions process, so it's worth students' time to learn about the process and develop and implement a strategy.

First, students should familiarize themselves with the National Collegiate Athletic Association's many rules and regulations. Athletes should check with the Eligibility Center, where they can learn what criteria they must fulfill to play college sports. They can also download a helpful guide for college-bound student-athletes from the website. Finally, they should register for the NCAA to begin making themselves visible to coaches.

Most high school students don't launch seriously into the processes of researching and applying to colleges until at least their junior years. But, according to Amy Rader Kice, assistant dean at St. Edward's University, athletes need to get moving sooner. Rader Kice writes that coaches often begin contacting highly promising athletes during their sophomore years, and many athletes know up to a year in advance which school they'll be attending and representing. It may be best to start narrowing down a list of schools during a student's freshman year of high school, then initiating contact with coaches the following year.

Marketing one's self as a college-level athlete is a lot like applying for a job. Because NCAA rules limit the amount of contact coaches can have with prospective college athletes, students should initiate contact themselves; there's no penalty for that. Again, this is particularly important for students who want to attend academically rigorous schools, says Keith Blackwell, founder of a subscription-based website designed to connect student-athletes and college coaches called Elite College Sports.

Students should submit whatever evidence of their prowess they can—videos of them playing, statistics, times, etc.—along with evidence that they can perform in the classroom as well. GPA, standardized test scores, and recommendation letters from teachers as well as coaches are all useful to coaches, who don't want to risk recruiting athletes who may lose eligibility if their grades aren't up to par.

Any serious athlete knows that training in the off-season is important. By the same token, summers can be critical periods for athlete recruitment, too. Many universities offer summer workshops in which coaches work with high school athletes; start looking for postings in February and March. For those who can afford to attend, it's a win-win: coaches are on the lookout for promising talent, and the athletes can benefit from coaches' wisdom and tips at the same time. 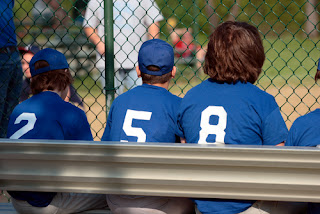 Finally, students should remember that a super-sonic fastball or a perfect three-pointer aren't the only things that turn coaches' heads. Coaches want to recruit students who demonstrate leadership, initiative, and resilience. Good sports who are enjoyable to have in the locker room are a pleasure to coach and can buoy a whole team's spirits. Demonstrating good citizenship may be just as important as demonstrating athletic skill.
Posted by Beth Guadagni, M.A. at 1:19 PM