We recently took a look at spelling apps, recommending those that we think do the best job of providing critical orthographic skills while being fun and engaging. Today, we turn our attention to math apps we think are worth investigating.

Carstens Studios designs, creates and illustrates dynamic learning applications for young children. Daren Carstens, the owner of Carstens Studios, shares that his goal for each app is to inspire the love of math in children by giving them a new way to conceptualize mathematical concepts. Math requires spatial and sequential understanding, as well as a great deal of reasoning and logical thinking skill.

There are an abundance of tools for building foundational numeracy and sequential skills. However, it can often be a challenge to find dynamic ways to build a child’s spatial understanding or reasoning skill. Carstens Studios offers a variety of fun, engaging tools that help students build their spatial understanding of math while encouraging reasoning and problem solving. We have detailed some favorite apps below that would add value to any math curriculum.


In the introduction to this app, Mr. Carsten shares that when he was in school, math just looked like squiggles to him, leaving his mind to wander and him to doodle on the edge of his notebook. He soon realized that there were places for doodles in math, and that doodling helped him better understand the mathematical concepts. Building on this notion, each game in the Math Doodles app gives players choices for displaying the numbers in different ways (as words, Roman numerals, currency, etc.). Furthermore, each math puzzle encourages students to experiment while developing and strengthening their strategy and problem solving skills. Math Doodles builds a wide range of critical math skills, including building basic mathematical and number sense, as well as teaching basic operations, time, money and geometric concepts. 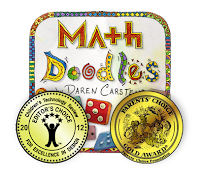 It is true that math is more than numbers. It takes more to master math than merely mastering numeracy skills. Mr. Carstens states that, “The key to understanding math is understanding patterns.” Therefore, the Attributes app is comprised of a series of seven games, designed to challenge kids' mathematical thought processes through tables, patterns, and the concepts of attributes. The games help late-elementary children develop the abstract reasoning skills required in higher-level math. By playing the Attributes games, students will build their understanding of pattern sequences, Venn diagrams, logic, and classification. 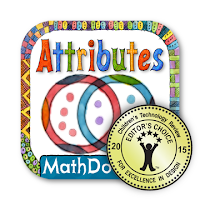 As we have mentioned, spatial reasoning is an important element of mathematics, especially in geometry. The mathematical puzzle Symmetry Shuffle,allows students to explore line and rotational symmetry while developing their spatial sense. Through the game student will build her understanding of slides, flips and rotations of two-dimensional shapes, as well as the concepts of congruence, similarity and symmetry. 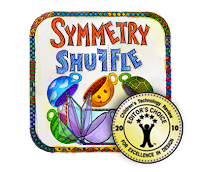 We can’t go into detail on every resource, but Carstens Studios has other apps that are also worth noting. So, if you are looking to provide students with extra addition and subtraction practice, check out Unknown Square, Sum Stacker or Connect Sums. Each of the apps has received numerous accolades and awards. But their biggest achievement is that they truly make math learning fun.
Posted by Renée Jordan at 9:11 AM