At the Yellin Center, we devote a lot of focus to students’ minds and brains. But the health of their bodies impacts their learning, too, and childhood obesity is one of the most common health problems faced by young people today. Children who are obese are far more likely than their slimmer counterparts to grow into obese adults. They are at risk for a host of health problems as they grow older, including Type 2 diabetes, stroke, and heart attack. And obesity wreaks an emotional toll as well as a physical one: overweight children are more likely to be bullied and to suffer from poor self-esteem.

According to Dr. Chad Hayes, author of the pediatrics and parenting blog Chad Hayes M.D.  and pediatric resident physician in South Carolina, a few small changes are often all that’s needed, particularly if your child is still growing. Most overweight kids don’t need to shed pounds; rather, if they can maintain their current weight as they grow, things will balance out on their own.

Dr. Hayes reminds parents to focus on kids’ health, not on the numbers on the scale or kids’ appearance. He also offers parents the following four tips to help their kids attain, and maintain, a healthy weight:

1) Chew your calories. In other words, offer only calorie-free beverages. Juices, a common part of children’s diets, are filled with sugary, mostly empty calories and don’t curb kids’ appetites. The calories from just one serving of a sweetened beverage per day (juice, Gatorade, sweet tea, etc.) are enough to add up to a weight gain of 10 pounds per year. Hayes believes that once children are old enough to obtain adequate nutrition from solid foods, the only beverage they need is water. Sound boring? We suggest sparkling water. Or try keeping a pitcher of water filled with lemon or cucumber slices or mint leaves in the refrigerator for variety. Remember that unsweetened iced tea is calorie-free, too (although most types contain caffeine, which should be used in moderation and only for older children), and many fruit-flavored teas are available.

2) Stop bringing junk into the house. Suburban parents, we’re talking especially to you, here. Many kids in New York City can pick up their own snacks because of the freedom and autonomy offered by a pedestrian-dominated city, but the average suburban family has to drive to obtain groceries. That means parents have almost total control over whether their kids have access healthful foods or junky snacks. “If it’s not there,” says Hayes sensibly, “they won’t eat it.” Offer low-fat string cheese, fresh or dried fruit, sliced vegetables, air-popped popcorn, or raw nut mixes instead of chips and cookies (and don’t forget to keep an eye on kids’ portions).

3) Eat from farms. Nutrition labels can be confusing, but luckily the best foods for you tend not to have labels at all. Pick up foods that don’t come in packages, like fruits and vegetables. Hayes suggests navigating the grocery store strategically by shopping only around the perimeter, where the produce, butcher, and dairy sections tend to be located. The center aisles are home to processed food and should be avoided, especially when one shops with children who may beg for the things they see there. 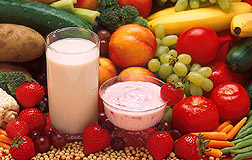 4) Get moving. Banish kids to the backyard or park, if those are safe places for them to go on their own. If not, accompany them and transport yourselves on foot or bicycle if that’s a reasonable choice. Busy parents can try to coordinate with neighbors to share supervision duties or sign kids up for sports teams of all kinds; look for options like rock climbing at an indoor gym or tae kwon do if your child isn’t much of a jock. Remember that biweekly participation in a sport is not license to supersize kids’ diets, though. Hayes cautions that it’s a lot easier to eat 200 calories than it is to burn them.
Posted by Beth Guadagni, M.A. at 3:37 PM