When it comes to developing literacy skills, practice makes perfect. The more time children spend recognizing letters, sounding out words, and using spelling patterns in their writing, the more accomplished they become. It seems obvious that time working to develop reading and writing is time well spent; after all, literacy skills are essential for academic success. Less time, however, is devoted to helping kids master the skills that some experts refer to as “emotional literacy.”

Nearly everyone has had encounters with people who seem to be born with exceptional emotional literacy, or the ability to “read” others. Someone with strong emotional literacy skills seems to know just what to say in a tense situation. She usually excels in professions that require her to interact with, persuade, and lead others, like politics or sales. Socially, she’s enjoyable to be around. Children with strong emotional literacy tend to get along with adults and other kids alike. They can detect subtle emotional nuances conveyed by a slight shift in tone of voice or a fleeting expression.

There is evidence to suggest that an increase in screen time leads to a decrease in emotional literacy. 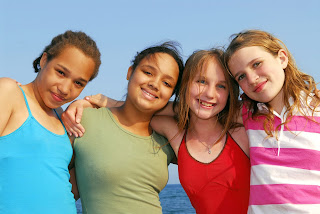 For example, a study published in Computers in Human Behavior found that sixth graders who attended an outdoor camp from which electronics were banned were much better at reading human emotions than peers from the same school who did not give up their devices. The really fascinating part is that the experimental group was without computers, smartphones, and tablets for only five days!

Just like standard literacy skills, emotional literacy (for most of us) can be perfected only through practice. And it’s difficulty to get that practice when social interactions take place via screens and are stripped of the facial expressions and voice modulations that accompany face-to-face communication. For many kids, then, it is essential to have opportunities for explicit practice. Here are a few ideas:

An obvious idea is to limit the use of devices—and we’re not just talking about kids’ use of devices, since young people will view their parents’ habits as the norm. Rather than designating certain areas of the house as device-free, try establishing only one or two small zones where phones and tablets are allowed; the expectation (for everyone) could be that these tools are not to be used in the rest of the house. If you try this idea, think about how the spot you pick for phone use might affect your family’s choices. The living room couch, for example, might encourage lots of screen time because it’s easy to sit there comfortably for hours.

Parents should model in-person communication wherever possible. Simply saying things like, “I think I’ll call Aunt Linda to discuss this; some conversations shouldn’t take place through email,” helps kids start to realize that the medium they use for communication is a choice.

Encourage young people to read fiction. Studies have demonstrated a strong connection between a person’s reading habits and his levels of empathy. Researchers believe the connection may be due to readers’ tendency to experience a character’s feelings almost firsthand.

Watch a new movie on mute. Using only the characters’ facial expressions and body language as clues, talk about what you think is happening in a scene and guess the characters’ relationships to each other. Then watch the scene with the sound turned up to see if you were right.

Spend time with toddlers or animals. Because babies and pets can’t talk, kids will have to rely on other cues to guess at what they think, feel, and want.

Travel. Taking kids to a different state, country, or even neighborhood or exotic restaurant helps them to realize that other people’s lives are not necessarily like their own. Talk about what is valued by another culture and analyze the differences and similarities kids observe. If there is a language barrier, so much the better; young people will be forced to rely on nonverbal signals to build understanding.
Posted by Beth Guadagni, M.A. at 10:52 AM