This week, October 7-12, is National Metric Week, a time to recognize and better understand the system of measurement that is in regular use in every country on earth -- except the United States. Designed to fall each year during the week which contains October 10th -- the tenth day of the tenth month -- this event was created by The National Council of Teachers of Mathematics in 1976, a year after the signing of the Metric Conversion Act signaling a renewed (and not yet successful) effort to bring the regular use of the metric system of weights and measures to U.S. trade and commerce. 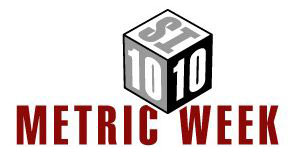 The metric system is generally accepted to have been first created by Gabriel Mouton, a vicar in Lyons, France in 1670. Mouton proposed a decimal system of measurement based on the length of one minute of  the arc of a great circle of the Earth (now called a nautical mile, 1852 meters). The metric system has gone through numerous revisions, including work by the French Academy of Sciences beginning in 1790 to create measures of volume as well as larger and smaller units of volume and length by multiplying or dividing by ten. Scientific surveys and international conferences continued to refine the system, the most recent being a simplification adopted in 1960 by  the General Conference on Weights and Measures, an international consortium.

There have also been -- and continue to be -- political considerations in the use of the metric system. In its early years in France, the system fell into and out of favor during different points in history, until it was finally adopted once and for all in 1840. Here in the U.S., Congress has been reluctant to require its use because of the preference of most American for the inch-pound system. However, as trade has become more global in nature, U.S. companies have needed to adopt the metric system to remain relevant in international commerce.

There is a detailed account of the history of the metric system on the website of the U.S. Metric Association, which also has puzzles that can help familiarize students with metric measurements.
Posted by Yellin Center for Mind, Brain, and Education at 12:07 PM