Get Off the Sofa!

Parents of college students have one more reason to try to get their sons and daughters off the sofa this summer. Even when the economy makes summer jobs problematic, sitting around while on vacation can not only impact a parent's patience, but the student's grades as well. 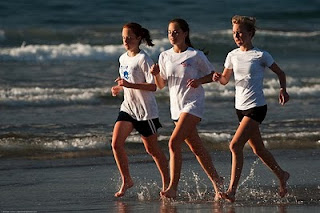 A study out of Saginaw State University in Michigan,  presented at the Annual Meeting of the American College of Sports Medicine looked at 266 undergraduate students and found a link between higher grade point averages and at least 20 minutes of vigorous activity each day. The study controlled for factors such as gender, race, and academic variables (including major, since the researchers posited that majors in fields such as kinesiology would be more likely to be active). The researchers determined that those students who met the higher activity levels had GPAs .4 higher than those who did not exercise.

Studies of younger students have shown the correlation between exercise and academic performance, but the focus on fitness in college students has not been looked at as extensively. We looked last year at the impact of fitness on a group of over one million military recruits in Sweden and on a relatively small group of American 7th grade girls, both of which groups showed distinct correlations between physical activity and cognitive performance.  This new study reinforces what research has told us about other age groups and hopefully will inspire college students - and all students - to get moving, both this summer and all year round.

Photo Credit: Mike Baird at Flickr.com
Posted by Yellin Center for Mind, Brain, and Education at 10:45 AM