There is news about a couple of issues we've discussed in recent blogs, so we're taking a moment to bring you up to date. 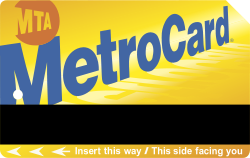 Free Metrocards for New York City students were threatened by budget cuts, an issue we addressed back in January of this year. The loss of free transportation to and from school would have hit low income families particularly hard and students and families protested this loss in a number of public venues, including a student march across the Brooklyn Bridge. Today's New York Times reports that the Metropolitan Transportation Authority, which issues the free passes, is near a deal with New York State which would require the State to contribute $25 million that would ensure that the free student Metrocards would remain available.We hope the dysfunctional New York legislature can keep this deal on track so that students and their parents are not penalized by the MTA.

Another issue we explored recently was a series of proposals from the New York State Board of Regents, the governing entity for schools in New York State, that would make changes to how special education services were provided to students. The Board meets again this coming Monday, June 21st and has just released its agenda and proposals. While it is not clear that the Board is making changes to VESID, which is the arm of the State Education Department that has been responsible for special education, they have proposed a number of important changes, which include how teachers are alerted to the contents of IEPs, changes to class sizes in certain situations, and removing limits on the size of speech and language groups. Parts of these meetings are accessible to the public via webcast, although it is not clear if the webcast will cover discussion and resolution of these important issues, which appear to be part of subcommittee discussions.
Posted by Yellin Center for Mind, Brain, and Education at 10:49 AM