Games can make for the best practice! Here are some fun ways to drill sight words in a playful way that will keep kids engaged. As a bonus, you can use sight word flashcards for many of them, making the set-up that games require less time consuming.

Tic Tac Toe
There are two variations of this game. Both begin with sight word flashcards face down in a pile. To play the simpler version, each player must draw a card and read it aloud before marking either an X or an O on the board. To make it more challenging, be sure each player has a pen in his own color. The first player will draw a sight word card and read it aloud to the other player. Instead of writing an X or O, the second player must spell the sight word in the square he chooses. 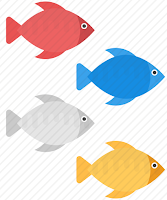 There’s no competition here, but kids think this game is tremendously fun anyway. If you’re pressed for time, put a paperclip on each sight word flashcard. If you have time to really get into the theme, cut out simple paper fish and write a sight word on each, then slide a paperclip over each fish’s head. Put all the prepared words into a very large bowl or bucket. Now you need a fishing pole: tape a piece of string 18-24 inches long to a ruler and affix a magnet to the end. Give the pole to the child and show him how to dip the magnet into the “pond.” He should read the word on each fish he catches, then go back for more!


Memory
This old favorite is great for practicing sight words. You’ll need two sets of flashcards with sight words written on them. Eight to ten pairs seems to be a good number—fewer than that is too easy, and more than that is overwhelming. Mix the cards up and turn them face down, arrange them into a rectangle, and take turns looking for matches. Make sure each player reads the words aloud as he turns the cards over. For extra practice, when the game ends each player should read their cards aloud while counting them to determine the winner.

Go Fish
You’ll need quite a few sight words for this game - at least twelve - but the good news is you can use the pairs of cards you made for Memory. Give each player three or four cards, which he should keep hidden. If you’re using flashcards, these will be unwieldy to fan out in one’s hand like playing cards, so cut a file folder in half and give a piece to each player. The folder can be propped up in front of the player so that he can spread his cards in front of him in secrecy. The rest of the cards go face down between the two players. The first player should ask the second if he has a particular word. If he does, he must give his card to the first player. If not, the first player must “go fish” by drawing from the pile in the middle. The game continues until someone runs out of cards, and at that point the one with the most matches wins.