Before we get into ideas for teaching sight words, you’ll need lists of words to teach. Luckily, when it comes to sight words the work has been done for you here.


Although the whole-language theory of reading instruction has been debunked in favor of phonics, the Dolch lists, which were compiled by whole-word proponent Edward Dolch, are still an excellent resource for sight words. Dolch combed through children’s books and made a list of the 220 words he saw repeated most often. Some of the words are decodable and others are not; what they have in common is frequency. The list, which was first published in 1936, is obviously not exactly current, but children’s literature hasn’t changed much, so it still serves as a good starting point; in fact, almost all teachers of early elementary grades use it in their classrooms. Since its first publication, the list has been broken into grade-level lists, beginning with Pre-Primer (the beginning of kindergarten) and going through third grade. These 220 words are where I’d start. 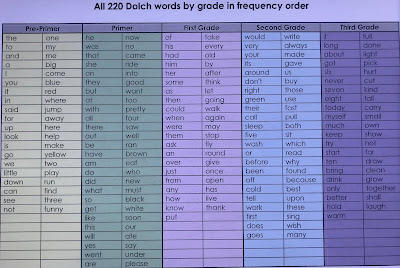 Keep in mind that although the words look short and easy, 220 is a lot! Young readers, particularly those in the earliest stages of literacy, will need to be taught just a few at a time. If you’re going to teach words the child has never seen before, stick with just one or two per session, and be sure to pick words that are visually different from each other, like “little” and “you.” Pairing words like “is” and “it” may lead to confusion.

Once you’ve chosen your words, here is a series of steps I like to follow when I’m teaching a child a brand new sight word.

1.      Write the word three times, then pass the paper to the child. The child should trace each word one letter at a time, saying the letters as she traces them. Tell the child that she is “telling her hand what to do.” (What she’s really doing is combining the visual input of the letters she sees, the motor input she gets from tracing the letters and from moving her lips and tongue to form the letter names, and the auditory input she gets from hearing herself say the letters. The more senses that are involved in a learning experience, the more likely a person is to remember what they learn.) When she gets to the end of the word, she should say the whole word (e.g. “y-o-u, you”).

2.      Next to the three words the child has just traced, ask her to write the word three times on her own. Again, she should say each letter as she traces it, then say the whole word when she gets to the end.

3.      This third step is optional but can be very valuable for kids. Ask the child to write the word three times in a way that will engage her gross motor system or feel more tactically engaging. This could be writing the word three times in huge letters on a whiteboard or on a wall with a wet sponge, using a fingertip to “write” the word on the carpet or in a sand tray, etc. Try out a few and let the child do the one she likes best. No matter what she chooses, be sure she goes through the routine of saying each letter, then the whole word.

4.      Now, back to the paper you were using before: turn it over so that she can’t see the spelling and ask the child to write the word three times, saying each letter, from memory. If she has to peek at the spelling on the opposite side, return some of the earlier steps in the process to help her ingrain the sequence more deeply in her memory.

5.      The fifth and last step is the most fun! Ask the child to close her eyes and write the word three times again, saying each letter as she does. Students, even my high school group, love this step; there’s something inherently entertaining about reaching the end and opening one’s eyes to see that the word has appeared, slightly wobbly but almost always surprisingly legible! The value of this part goes farther than just giving kids a giggle, though. When someone doesn’t watch their hands writing, the movements themselves seem to become discreet from the letters, becoming a series of motions instead, so that they get anchored in memory in a different way. You’re teaching the child’s hand to write the word by allowing muscle memory to step in.

This routine seems long, but once you (and your student) get the hang of it, it takes less than five minutes per word. And in my experience, kids really like the process. Focusing on writing the words instead of just recognizing their appearances makes the learning experience more multi-sensory for kids, and it’s also quite useful because sight words can be among the trickiest to spell right. And in the end, if a child can spell a word, recognizing it while reading is a piece of cake.

One exposure to sight words though, even one as thorough as this, isn’t enough. To build automaticity, you’ll need to spend a lot of time practicing the words you’ve taught. Next time, I’ll cover some of my favorite games and activities for helping kids learn to recognize these words instantly. In the meantime, here is a list of Dolch Fluency Phrases, broken down by age from pre-primer through second grade, that expand somewhat on the individual Dolch list words.

Pre-Primer Fluency Phrases
come and help
the little blue dog
up and away
a big jump
we can come
it is down here
find it funny
go for help
here I am
look up and down
in here
one little jump
look and see
make my bed
we can play
you and not me
one, two, and three
red and yellow
run away
said the cat
where to look
jump up
you can go

Primer Fluency Phrases
eat it all
a new ride
ate a cake
who I am
want it to go well
all very good
must be with me
black and brown
came but did not go away
did not do it
eat four buns
get good books
like to play
have to go into class
he and she
pretty please
she said no
go out now
on our mat
saw it and ran
they say so
must go so soon
that little brown hut
here and there
this and that, too
under the yellow sun
want to jump
all was well
went away
what we will do
who she will go with
yes or no

First Grade Phrases
you could go
every last one
after the game
fly from the nest
ask any friend
do it again
an easy test
go by the rule
give me my toy
going to have fun
had to play
her blue book
his little white dog
come find him
see how it is done
have just five more
know when to stop
live and let live
may open the box
three of them
old brown hat
ride once a day
put on a pretty dress
a round, white egg
some new cars
stop and say thank you
take them home
must think hard
walk to the park
three were red
see then do