Your blogger has never argued a case before the Supreme Court, although I was admitted as a member of the Supreme Court bar many years ago with other students from my law school alma mater. A couple of years ago, I had the opportunity to visit the Court again, this time as our eldest son was admitted to the Court with members of his law school class. We had the chance to meet in a small group with Chief Justice Roberts and Justice Ruth Bader Ginsberg. We got to attend a reception in the Court building and to sit in the courtroom and listen to the Court issue its decisions in a number of cases before our son and his colleagues were sworn in as members of the Supreme Court bar. It was a very memorable experience. 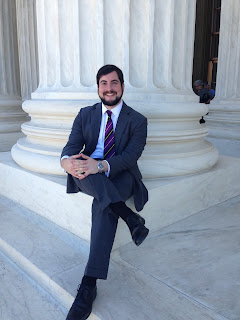 If you have been on a remote island without access to the internet, you might not be aware that the U.S. Supreme Court is very much in the news today. Justice Anthony Kennedy, who will turn 82 in July, has tendered his resignation. Since his appointment by President Reagan in 1987 (he actually took his seat on the Court in early 1988), Justice Kennedy has often served as the "swing vote" on many important cases. His replacement will be appointed by the President and must be confirmed by the Senate. It can be expected that Justice Kennedy's replacement will be more conservative than he has been. Since Supreme Court justices have lifetime tenure (unless they resign, as happened here), Justice Kennedy's replacement can be expected to have an impact on our laws for many years to come.

Whatever your views of the Supreme Court or its future, you might want to take advantage of some excellent materials geared for kids to discuss these current events with your school-aged children.


A real-life story of a current Supreme Court Justice, geared for four through eight year olds (although this adult enjoyed it greatly), is I Dissent: Ruth Bader Ginsburg Makes Her Mark by Debbie Levy. With lively illustrations to help children access the story, this explanation of how Justice Ginsburg broke down gender barriers throughout her life is a satisfying read. [Adults who enjoy I Dissent might want to read Notorious RBG: The Life and Times of Ruth Bader Ginsburg.]

A whimsical tale for elementary students, with guides for parents and teachers included, is
Marshall, the Courthouse Mouse: A Tail of the U. S. Supreme Court, by Peter W. Barnes.

Finally, Channel Thirteen, a PBS station, has a list of resources about the Supreme Court for children and for young adults and teens. Unfortunately, the links in this list are no longer live, but a search engine can help locate these helpful books.