Yesterday your blogger attended the Annual School Law Program given by the Practicing Law Institute here in New York City. Each year, this program features expert speakers on issues of interest to attorneys who work in the field of education and this year's program was especially strong, touching on Section 504, the latest court decisions impacting special education, and ethical issues.

One particularly timely topic, presented by Professor Emily Gold Waldman of Pace University Law School, was student protest and speech and how the courts balance the free speech rights of students with the rights of schools to discipline students for their conduct. Although the U.S. Supreme Court cases in this area aren't new, they are certainly timely in this era of political polarization and student activism. 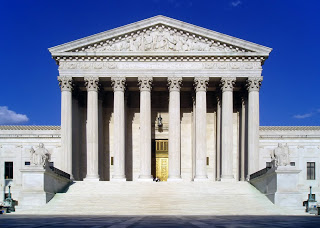 The earliest of the cases presented by Professor Waldman was Tinker v. Des Moines Independent Community School District , from 1969. It involved students who were suspended for wearing black armbands in 1965 to protest the Vietnam war. The school had learned of this plan and had adopted a policy that anyone wearing a black armband would be suspended. The school followed through on its threat and the students sued. The U.S. Supreme Court, in a decision by Justice Fortas,  found in favor of the students and noted that,

"In our system, state-operated schools may not be enclaves of totalitarianism. School officials do not possess absolute authority over their students. Students in school, as well as out of school, are "persons" under our Constitution. They are possessed of fundamental rights which the State must respect, just as they themselves must respect their obligations to the State."

The decision went on to state:

"They neither interrupted school activities nor sought to intrude in the school affairs or the lives of others. They caused discussion outside of the classrooms, but no interference with work and no disorder. In the circumstances, our Constitution does not permit officials of the State to deny their form of expression."

The outcome was different in Bethel School District v. Fraser, a 1986 decision weighing in on a 1983 incident where a student was prohibited from delivering a speech filled with sexual innuendo and references. The Supreme Court noted the Tinker decision, but distinguished it from the situation here, and found in favor of the school district, stating,

"It does not follow, however, that, simply because the use of an offensive form of expression may not be prohibited to adults making what the speaker considers a political point, the same latitude must be permitted to children in a public school."

Two other cases help clarify students' rights. Hazelwood School District. v. Kuhlmeier was a 1988 decision upholding the right of a school district to censor student articles in the school paper. The Supreme Court found that because the the school newspaper was sponsored by the school, it could be distinguished from the situation in Tinker. Likewise, in Morse v. Frederick, decided in 2007, when students held up a banner the school deemed to be offensive ("Bong Hits for Jesus") during an Olympic Torch Relay that the school had taken students to watch, outside the school, the Court found the school could discipline the students since the activity was similar to a class trip and “schools may take steps to safeguard those entrusted to their care from speech that can reasonably be regarded as encouraging illegal drug use.”

Students contemplating protests in and around their schools may want to familiarize themselves with these and similar cases, to understand their rights -- and the limitations that schools can place upon them.

Posted by Susan Yellin, Esq., Advocacy and Transition Services at 11:34 AM