New Attention Being Paid to Attention

When might a student’s focus be more likely to drift to the window rather than stay with the task at hand? Would it be when the material is easy or when it is difficult? A new study set out to explore and build on past research regarding this question. 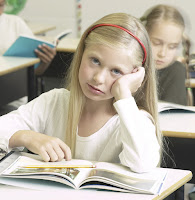 Psychologists at the University of Illinois presented subjects with math problems to solve while pictures of neutral scenes, as potential distractors, flashed on a computer screen. As indicated by eye-tracking devices, participants who were given only easy problems to solve (Group A) were more likely to look at the distractors. In contrast, participants who were given only challenging problems (Group B) were less likely to look at the distractors. Financial incentives were incorporated into a variation of the experiment, but they seemed to have little impact. The more challenge that the participants encountered when working on the problems, the less likely they were to be distracted, regardless of financial incentive.

Some participants were presented with a mix of easy and hard tasks. How distractible they were at any given time did not correlate with the difficulty level of the particular problem they were working on then. In other words, it seemed to be participants’ overall level of engagement with the task, rather than the difficulty level of any particular item, that accounted for the differences in distractibility between Group A and Group B.

The results suggest the importance of making sure that students are cognitively engaged. It is not enough to identify and assist students who may be struggling with coursework; it is also important to identify, and find ways to stimulate, students who may be bored with material that is not challenging them enough.
Posted by Lindsay Levy, Ed.M. at 10:24 AM