Recommended Reads: Before I Fall

Before I Fall by Lauren Oliver 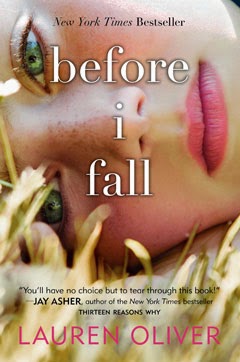 Adult Themes: Parents should definitely review this book before handing it to their teenage daughters. Several blunt references to sexual encounters are described and references to substance use are abundant. (A large portion of the action takes place at a high school house party with no parents in sight.) Oliver does not glorify this questionable content though, and we're confident that poised high school students can handle it. This book is inappropriate for middle school students, however.

Plot: The book opens with seventeen-year-old senior Samantha Kingston’s death in a late-night car crash. Our immediate sympathies for Sam are tempered over the next few pages, however, as she takes the reader through some of her history. Wildly popular, pretty, and wealthy, Sam and her three best friends are the unchallenged queens of Thomas Jefferson High and have maintained their edge by making life miserable for anyone who crosses their path. They mercilessly put others down, start rumors, and exclude whomever they please, and their cruelty seems only to increase their social standing. Instead of death being the end for Sam, however, she finds herself waking up all over again on the morning of crash and relives the same day until the night is ended abruptly by her death. Again. And then she finds herself back in bed the morning before the crash once more. As Sam experiences her last day again and again, she makes different choices and learns more about the people around her, and about herself. Her last-minute discoveries cause her to question the school’s hierarchy, her relationship with her demanding boyfriend, her friends’ ruthless dominion over the school, and her own insecurities. Can Sam put things right and save herself?

Our Take: This worthy book may come off initially as fluffy and trite. It's tempting to brush off Oliver's plot as a rewarmed version of an idea that’s already overdone. Before I Fall is tolerably well written, however; the first-person narration brings Sam to life and is so authentic that one suspects that Oliver put in a lot of time eavesdropping on teenage girls. More important than the style, though, is the fact that this book will get adolescent girls thinking without ever feeling preachy. Sam is still sassy and cool at the end of the book even after she has been made to understand the error of her ways, demonstrating that one doesn’t have to be dull and pious to be a good person. Oliver successfully walks a tricky tightrope here; she is able to maintain Sam's appeal while making it clear that many of the traits associated with popularity are negative ones. Another plus: things at the end of the book are not as tidily tied up as they might have been if Oliver were a lesser writer, making Sam's transformation and the rather fanciful plot feel real enough to be taken seriously.

Good to Know: Fox purchased the movie rights to Before I Fall in 2010. The movie version is still classified as “in development,” though, so enthusiastic readers may have a while to wait.
Posted by Beth Guadagni, M.A. at 11:37 AM