We pick up our Recommended Reads series, which reviews books or series written for children or young adults, with Jennifer Donnelly's A Northern Light, a mystery based upon real-life events. 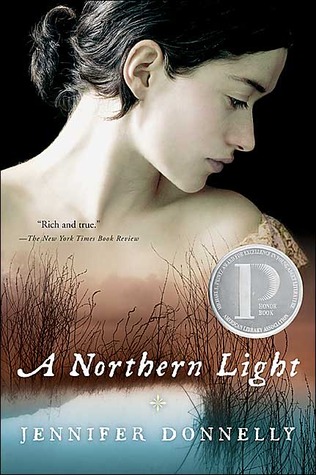 Adult Themes: A few references to sexuality and some intermittent cursing, all relatively mild – our heroine is a good Victorian-era girl.

Plot: The summer of 1906 presents Mattie Gokey with a great deal of uncertainty. On one hand, she wants nothing more than to attend Barnard College and use her considerable talents to write stories and books. On the other hand, she’s tied to her father’s farm in upstate New York, where she must help him with the work and care for her younger sisters after her mother’s death. To complicate matters, handsome Royal Loomis has started courting her, and though he seems wrong for her in many ways, she’s tickled by his attention. Marrying him is an attractive prospect, but it would mean forgoing Barnard. And Mattie is horrified by the grinding responsibilities her friend Minnie endures as the young mother of infant twins who must also cook and clean for her husband and his hired workers. The prospect of domestic life is bleak. On the other hand, her reading, coupled with her relationship with her subversive teacher, lead her to wonder whether being a female author is much more attractive than the being a housewife on a farm. When Mattie takes a job at a nearby summer resort to help her father buy a mule, a guest named Grace hands Mattie a packet of letters and tells her to burn them. Hours later, Grace’s lifeless body is retrieved from the lake. In combing through Grace’s letters, Mattie strives to discover whether Grace’s death was an accident or something more sinister, and draws some important conclusions about her own life in the process.

Our Take: (Warning: Includes spoilers!) One of the most fascinating facts about this book is that the murder around which its plot revolves actually took place. Grace’s letters were found in her murderer’s room, not placed into the hands of a sixteen-year-old hotel employee, but Donnelly has lifted the case’s facts and names from the same historical events that inspired Theodore Dreiser’s An American Tragedy. This book is a gem even without that background knowledge, however (we confess that we did not know it until reaching the Epilogue). Mattie is a thoroughly admirable heroine: intelligent, motivated, talented, and loving, but still flawed enough to be relatable. Donnelly’s picture of 1906 upstate New York vividly presents the struggles of everyday life in the country: racism, sexism, poverty, back-breaking farm work, primitive medicine, and limited access to education. Reading this book is far from an onerous chore, however; there is plenty of levity, courtesy of Mattie’s little sisters and her best friend Weaver, and readers will delight in the prank Mattie and her friends play on a thoroughly despicable hotel guest. Donnelly shapes each chapter around Mattie’s word of the day, ensuring that readers will walk away from this book with an enriched vocabulary and perhaps a hint of Mattie’s love of words. And Mattie’s courageous decision at the end of the book will leave readers cheering for her, even if they are selfishly a little sad that the book has come to an end.
Posted by Beth Guadagni, M.A. at 9:46 AM