Today, we pick up again with our Recommended Reads series, which highlights book recommendations for children and young adults. Today, we review Just Listen by Sarah Dessen, originally published in 2006 by Viking Juvenile. 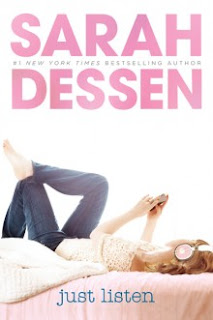 Ages: 8th grade and up; will likely appeal primarily to girls

Plot: Annabelle Green begins her junior year of high school as an outcast. On paper, she has everything: loving parents, a fancy house, a modeling career, and older sisters beautiful enough to be models in New York themselves. But below the surface, things are not what they seem. Annabelle’s mother struggles with depression and her sister Whitney has been forced to move back home as she works with a series of specialists to battle her anorexia. Shy, conflict-averse Annabelle wants to quit modeling but doesn't want to disappoint her mother. Worst of all, due to a misunderstanding at a party at the end of the last school year, Annabelle’s best friend Sophie refuses to speak to her, and she’s the topic of much mean-spirited gossip around school. Just when it seems no one will ever speak to her again, however, Annabelle meets Owen, another outcast. Owen is obsessed with

music and has his own radio show, and these topics serve as a catalyst for conversation and eventually friendship between the two. Dessen alludes to the cause of Annabelle’s falling out with Sophie throughout the book, but it is only toward the end that we learn what actually happened. (Discontinue reading here if you want to avoid spoilers.) What appeared to be a tryst between Annabelle and Sophie’s boyfriend Will was actually a rape. Ashamed, Annabelle told no one what really happened, but when Sophie’s friend Emily falls victim to Will as well, she goes straight to the authorities. Annabelle finally makes the wrenching decision to testify against Will, too, and the book ends with Will behind bars, Whitney on the road to discovery, Annabelle’s mother displaying strength Annabelle has never seen in her, and Annabelle and Owen launching a romantic relationship.

Adult themes: While the plot includes a rape, the scene is not graphic and shouldn't be troubling to girls in late middle school or high school. There are very occasional instances of mild cursing. Also, underage characters in the book occasionally drink beer, though drinking is by no means glorified. The main character, Annabelle, is portrayed as sipping beer on two occasions, and other characters who drink more heavily are presented in an unflattering light.

Our take:  Just Listen tackles a laundry list of tough topics with sensitivity and wisdom. Young people are often understandably resistant to reading books bearing overt “lessons,” but the values Dessen advocates are worked carefully into the narrative so that they seem organic and won’t be blatant to most young readers. Owen, an endlessly admirable character, teaches through example the importance of honesty—both with one’s self and with others—friendship, and individuality. Annabelle’s journey and some none-too-subtle analogies to the glass house in which she lives will cause girls to question whether they can really know everything about a person or a situation just by looking. As models, Annabelle and her sisters are very visible and many assume that they lead charmed lives, but this is far from the truth. This concept is strengthened with continuous references to Annabelle’s modern, window-dominated house, which seems to reveal the lives of her family to any passing observer but is actually filled with hidden spaces. This rather obvious symbolism is a great introduction to extended metaphor for readers with weaker skills. Note that this group may find the construction of the book slightly confusing, however. Scenes typically open on Annabelle at a photo shoot or in her bedroom and then launch into flashbacks so lengthy and developed that some readers may be disoriented when, suddenly, Annabelle is back at the shoot again. Just Listen lacks the gorgeous language and subtlety of a classic, but it’s readable and real and would be a great choice for most adolescent girls.