Recommended Reads: Down the Rabbit Hole

Down the Rabbit Hole by Peter Abrahams 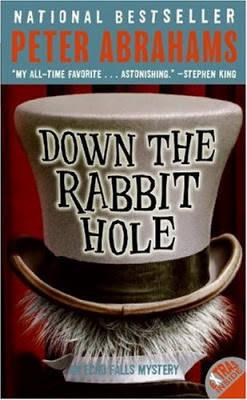 Awards: Nominated for the Edgar Award, a prize awarded by the Mystery Writers of America for distinguished work in the mystery genre.

Plot: Thirteen-year-old Ingrid has a lot going for her. She’s a star soccer player and a great actress -- so good that she lands the leading role in an upcoming community production of Alice in Wonderland. But Ingrid’s life turns complicated when a pair of her shoes goes missing and turns up in a crime scene! A local woman has been murdered, and it turns out that Ingrid was the last one (other than the killer, of course) to see her alive. Anxious to avoid dealing with the police, lest they get the wrong idea about her involvement, Ingrid puts her pluck, smarts, and sleuthing skills (learned through an obsessive reading of Sherlock Holmes’s mysteries) to work to track down the killer. The end is suspenseful and satisfying, and readers will be hooked from the first chapter.

Adult themes: There’s not too much that’s overtly objectionable in this book. Ingrid shares her first kiss with Joey Strade, but it’s an innocent scene that’s fittingly charming and awkward. On a darker note, Ingrid’s brother Ty is working out a lot, building muscle fast and behaving increasingly aggressively, but the suspicion that he may be using performance enhancing drugs is not broached overtly until the second book in the series.

Our Take: Ingrid is ridden with just enough teeny-bopper angst to make her believable, but enough wit, courage, and poise to make her likeable to both adults and kids. The mystery is well-paced and, even for an adult reader, full of enough twists and turns to make the solution tough to guess until near the end. We’d expect nothing less from bestselling mystery author Peter Abrahams; though this is his first novel for young people, he’s clearly a seasoned craftsman of the genre. The suspense in this book is well-balanced with quirky, ironic humor, however, which is an unexpected touch in a mystery that should especially appeal to young readers. Bookish types will appreciate the clever literary allusions that pepper the book, from the more obvious references to Sherlock Holmes and Alice in Wonderland to the more subtle Shakespearean references. Readers will love following Ingrid’s search for the truth in this novel, all the way to its nail-biter ending.

Sequels: Down the Rabbit Hole is the first of a three-part series called Echo Falls Mysteries. Its sequels are Behind the Curtain and Into the Dark.