Each year, fans around the world celebrate the life and work of Roald Dahl on his birthday, which was yesterday, September 13. During his varied and fascinating life, Dahl was, at various times, a salesman, fighter pilot, short story author, novelist, screen writer, poet, and philanthropist, as well as an amateur medical researcher! But he is best known for the enduring classics he added to the canon of children’s literature, like Charlie and the Chocolate Factory, James and the Giant Peach, The BFG, Matilda, and The Witches, to name a few. 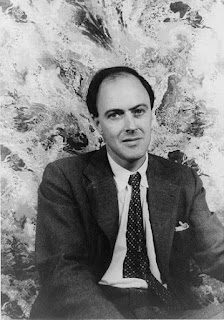 As a child, Dahl was miserable at school because of cruel teachers and one domineering headmistress (who sounds a lot like Mrs. Trunchbull in Matilda). His fondest memories of those childhood days were visits to a local candy shop and, later, attending a school near the Cadbury chocolate factory, where the schoolboys were often put to work as taste testers.

Despite his height, during World War II, Dahl joined the Royal Airforce where he had a number of adventures, including crashing landing several times (once because he was shot down). Read Going Solo (appropriate as an independent read for middle school and up) for more information about his action-packed military career.

Dahl never learned to type and wrote every word of each of his books with a pencil. He always wrote several drafts of his work before deeming it finished.

Dahl wasn’t too keen on the way The Gremlins, his first children’s book turned out, even though Eleanor Roosevelt enjoyed it so much that she frequently invited Dahl to visit the family at the White House during his time in the United States. Dahl turned to adult literature instead. He wrote many short stories that were frequently compared with works by O’Henry and Saki because of their plot twists and surprise endings.

James the Giant Peach, Dahl’s first children’s book after his disappointment with The Gremlins, was written to entertain his daughters Olivia and Tessa. It was published in 1967.

When Matilda was published, it broke existing sales records for children’s books in the United Kingdom by earning half a million pounds in just the first six months.

Dahl’s death at the age of 74 (November 23rd, 1990) has done nothing to dampen the popularity of his books; in fact, sales have continued to increase each year!


For more information about Roald Dahl, visit his official website to read a short biography and interview and to flip through a digital photo album. The site includes other fun features for Dahl fans. One is a Buckswashling Book Chooser, in which a child clicks a color on a wheel, which in turn recommends a Dahl book associated with that color. Or, send your own peach on a “jumpswiffling journey around the world” by clicking on “Follow that peach!” You can email a virtual peach to a friend or download a paper-peach gram to put in the mail. By giving each peach a unique name, senders can track their peaches’ progress as friends pass it on to other friends. Recipients can upload photographs of themselves holding their peach-grams in their own locales, making for interesting and memorable photo trails.

But of course the best way to celebrate Roald Dahl is to lose yourself one of his fabulous books. Which of Dahl’s books is your family’s favorite?