A recently published study in the journal Nature has demonstrated changes in both IQ and the size and density of specific brain regions in a group of 33 healthy teens. These findings are of particular interest because IQ has long been thought to be fairly fixed, with scores at one point in time usually very close to scores earlier or later in life. 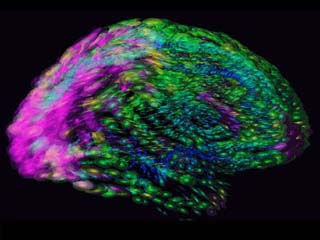 IQ is a numerical measure that is derived by examining a number of tasks in two general areas -- verbal skills and performance (non-verbal) skills. When the "scores" of each of these subtests are looked at together, clinicians are generally able to derive a single numerical expression of the aggregate skills and this number is the IQ. (Note that when there is signficant scatter among the subtest scores it may not be possible to derive a meaningful aggregate score for an individual.)

What the researchers found through their use of standard IQ testing and functional and structural brain imaging was that 33% of the teens showed increases or decreases in their full scale IQ score from age 14 to age 18; 39% showed changes in their verbal scores; and 21% showed changes in their performance IQ. These changes were both upward and downward and in most cases were of at least 15 points. Notably, changes in all of the verbal scores were related to changes in both volume and density in an area of the brain related to speech, the left frontal cortex. They also noted that changes in most of the performance tests were associated with density changes in an area of the brain associated with finger movements.

The study authors suggest that clinicians dealing with patients in this age group be aware of these flucuations to better assess cognitive changes that may occur for other reasons. They also note that the question of whether IQ changes later in life is not yet determined.

Photo used under Creative Commons by Isaac Mao
Posted by Yellin Center for Mind, Brain, and Education at 10:29 AM