Few parents would argue that watching television is a beneficial activity for their kids, but many assume it is a harmless way to keep children engaged for relatively brief periods of time. 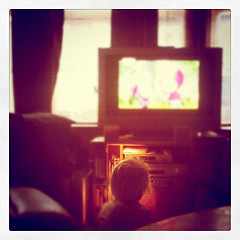 A recent study led by Professor Angeline Lillard and Jennifer Peterson of the University of Virginia, and reported in the journal Pediatrics, found that certain kinds of television viewing by young children may not be so benign and may, in fact, have a significant negative impact on children.

The study examined 60 four year olds, mostly white and middle or upper-middle class in background, and found that their executive functioning – their ability to maintain attention, control behavior, and solve problems – was severely compromised after just nine minutes of watching a fast-paced cartoon (in this case, the popular Sponge-Bob Squarepants). Other groups of children spent nine minutes watching Caillou, a realistic cartoon that moves at a slower pace, or drawing without watching television at all.

Psychologists administered assessments immediately after the nine-minute interval, testing to see how well the children solved problems, followed rules, remembered what they had been told, and were able to delay gratification. The drawing and Caillou groups performed similarly, while the Sponge-Bob group lagged far behind.

The authors note that their study raises important implications about the learning and behavior of young children. They caution parents that what children watch may affect their life-long executive functioning. However, it should be noted that the study investigated only the immediate effects of fast-paced television shows and did not probe long-term results, although the authors did reference the findings of earlier studies which indicate that the impact of television watching may have some longer-term impact.

Professor Lillard has created a Q & A site that offers guidance for parents based upon the findings of her study.