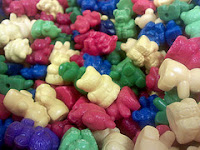 Just about everyone is familiar with dyslexia, a learning disability that can make reading a difficult process because of an inherent difficulty in connecting sounds to symbols like letters. Fewer people, however, have heard of dyscalculia, a learning disability specific to mathematics. Like dyslexia, true dyscalculia affects only a small portion of the population (estimates range from 5-8%), yet it poses a tremendous difficulty to those affected by it.

Studies indicate that children who demonstrate difficulty differentiating between different sounds during their early years of life are at risk for dyslexia. Similarly, preschool-aged children who demonstrate difficulty with estimation tasks may be showing early signs of dyscalculia. Several recent studies have found that young children’s innate estimation capabilities are predictive of their later performance in math. Kennedy Krieger Institute research scientist Michele Mazzocco, Ph.D. says that children with dyscalculia lack “number sense,” an instinct for quantity that cannot be simply memorized.

Emerging research in this field was considered as we redesigned some of the assessment tools we use at The Yellin Center to evaluate children’s math capabilities. For students who demonstrate difficulty in math, we now administer a brief, proprietary dot estimation task in which children are given brief exposures to cards with varying numbers of dots, then directed to complete different estimation tasks. The results are often illuminating, and we appreciate the increased insight we can gain by better assessing our young students' estimation skills.

Image used under Creative Commons by Shawn Campbell
Posted by Beth Guadagni, M.A. at 9:57 AM