The National Institute of Mental Health has released a new publication on Depression and College Students. Written largely in a question and answer format and available for download, the booklet is designed for college students themselves and is intended to address the findings of a 2009 study which found that nearly 30% of students at two and four year colleges described themselves as "so depressed that it was difficult to function" some time in the preceding year. 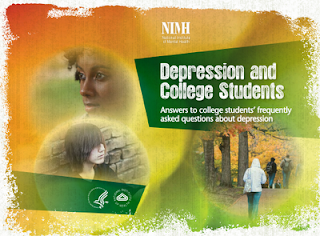 The booklet notes that untreated depression can lead to self-medication with illicit drugs or alcohol, which can lead to secondary consequences such as engaging in unsafe sex. Of even greater concern, students with depression are more likely to consider suicide, which studies have shown is seriously considered by 6% of all college students and attempted by 1%. Suicide is the third leading cause of death among 15-24 year olds.

What we like about this publication is that it focuses on ways to recognize depression and on how to get help for yourself and for a friend or classmate, as well as an explanation of various treatment options.

Two helpful resources that are not mentioned in the booklet are the organizations NAMI, the National Alliance on Mental Illness, which offers resources and support to individuals of all ages and Active Minds, which has groups on many college campuses. Active Minds describes its role as "to increase students’ awareness of mental health issues, provide information and resources regarding mental health and mental illness, encourage students to seek help as soon as it is needed, and serve as liaison between students and the mental health community."
Posted by Yellin Center for Mind, Brain, and Education at 11:55 AM