No matter how many times we look at lists of books that have been banned, or which have attacked by one group or another, we are always astonished. To Kill a Mockingbird? Of Mice and Men?? Harry Potter??? All of these have been the subject of banishment or attack.

Banned Books Week, which runs this year from September 24 to October 1, is a great time to celebrate your intellectual freedom by reading or rereading some of the most classic books in our canon that were once considered too radical to be part of schools and libraries. While it is easy to brush aside book-banning as a thing of the past, the American Library Association reports that libraries in the United States received 4,660 formal challenges in the past ten years! 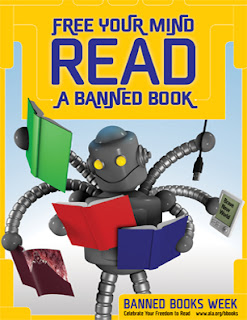 To see lists of banned and frequently challenged books, and to access ideas about ways to celebrate Banned Books Week, take a look at the ALA's website.

Don’t forget to take advantage of Banned Books Week to motivate reluctant readers. Nothing is more tantalizing than forbidden content. Telling a teenager that some people consider a particular book to be inappropriate reading material is often the only incentive you’ll need to offer.
Posted by Beth Guadagni, M.A. at 1:55 PM