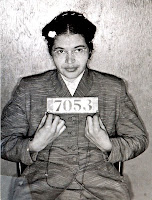 Today is the 55th anniversary of Rosa Parks' historic refusal to "move to the back of the bus" as directed by a City bus driver in Montgomery, Alabama. Her arrest for violating state segregation laws that required, among other things, for blacks to give up their seats to white passengers, led to a boycott of the Montgomery City buses that lasted more than a year and culminated in a U.S Supreme Court decision declaring that segregation on public transportation was unconstitutional.
What does this important event in the civil rights movement have to do with educating students with learning and other difficulties? Plenty. It was the civil rights movement and the court cases that grew out of the movement, such as Brown v. Board of Education  that established the principles that all individuals were entitled to equal access to public services, including schools and transportation. Once that basic rule of law was settled, it laid the foundation for literally opening the doors of school houses to other victims of discrimination -- children with disabilities, who had often been denied access to public education.
It took way too many years for Congress to pass the predecessor legislation to what is now the Individuals with Disabilities Education Act, which was called Education for All Handicapped Children Act when it was passed in 1975. In the records of Congressional findings leading up to the 1975 law, it was determined that of the eight million children in the United States with disabilities (of all kinds), more than half were not receiving appropriate educational services and at least one million were excluded from school completely. From its earliest incarnation, 35 years ago this past week, the IDEA established the standards that must be applied to all children with disabilities -- the right to a Free, Appropriate, Public Education (FAPE) in the Least Restrictive Environment (LRE), based upon a student's individual needs (IEP).
So, the next time you are sitting at an IEP meeting, arranging the support services your child requires to help him or her deal with learning or other difficulties, take a moment to remember the people and events that led to a national realization that discrimination and exclusion of any of our citizens from public services is not permissible under our Constitution.
Posted by Yellin Center for Mind, Brain, and Education at 11:29 AM