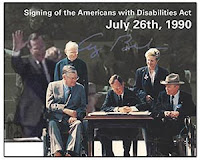 Today is the 20th Anniversary of the Americans with Disabilities Act (ADA), signed into law by President George H. Bush on July 26, 1990.
The ADA was a latecomer to the list of legislative initiatives that individuals with disabilities may encounter during their lifetimes. The predecessor legislation to the Individuals with Disabilities Education Act (which took the name we now shorten to IDEA in 1991) first became law 35 years ago as the 1975 Education for All Handicapped Children Act. Section 504, the law that families of school age children may encounter because it provides services and plans for students with disabilities who do not qualify under the IDEA, is part of the Rehabilitation Act of 1973.
So, why is the ADA important to students who struggle in school and their families? Because the IDEA comes to an end for almost all students once they graduate high school. As we tell families all the time -- and can't stress too much -- there is no IDEA in college! College students with learning challenges (as well as those with physical and emotional disabilities) must rely upon the protections of the ADA to obtain the academic adjustments, modifications, and auxiliary aids and services they require to access the campus and curriculum.
Once these students finish their education, whether after high school, college, or at the post-graduate or professional school level, they will again have to rely upon the ADA as they seek employment and begin to work in their chosen field. As students move through their K-12 education, they need to understand not just their profile of strengths and weaknesses, but to know what their rights are and which laws apply to them. By high school, students who receive services under the IDEA or Section 504 should be aware of the impact of these laws on their education. They also need to begin to understand what kinds of rights may be available to them -- and the limitation of these rights -- under laws such as the ADA that they will need to rely upon as college students and adults.
Posted by Susan Yellin, Esq., Advocacy and Transition Services at 10:46 AM