Parenting is not an easy job. Parents usually know what their children should be doing -- getting plenty of sleep, lots of exercise, and having limited screen time, among other things -- but applying these goals to their children is not always easy.

A recent study reported in the British medical journal Lancet Child and Adolescent Health looked at 4524 children in the U.S., aged 8–11 years, to examine the extent to which these elementary age children met current recommendations set forth in the Canadian 24-Hour Movement Guidelines for Children and Youth. These recommendations include getting 9-11 hours of sleep each night, at least 60 minutes of physical activity each day, and having less than two hours of recreational screen time daily.

The children in the study were evaluated using the NIH Toolbox for the Assessment of Neurological and Behavioral Function , which  looks at such components of cognitive function as Executive Function, Episodic Memory, Language, Processing Speed, Working Memory, and Attention. 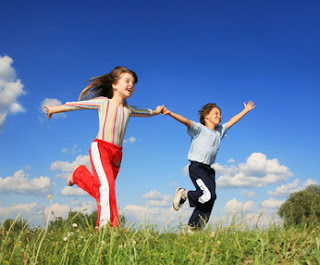 Hopefully, seeing the real, positive associations between meeting the recommendations for these behaviors and improved cognition may be enough to reinforce parental efforts to get their children to meet these laudable goals for sleep, exercise, and screen limits.

Posted by Yellin Center for Mind, Brain, and Education at 11:12 AM