More than four years ago, prompted by the World Cup Games of 2014, we wrote about new pediatric concussion guidelines.  Now, the  NFL season is about to get underway, and lots of the football fans we know are dismayed at the frightening statistics about head injuries to players, both professionals and those who play in school. Moviegoers who saw the 2015 film Concussion saw this issue dramatized in a compelling way. Because no women play in the NFL and only a handful play football at college and high school levels nationally, there have been no comparisons between how blows to the head might affect male and female football players differently.

Such is not the case with soccer. Both boys and girls play in schools, in leagues, and informally and it is possible to look at differences in how blows to the head -- from "heading" the ball or otherwise -- might differ between male and female players.

Research findings reported last month in the journal Radiology that looked at the results of  sophisticated neuroimaging of approximately 100 soccer players in their twenties, evenly divided between men and women, suggest that "women may be more sensitive than men to the effects of heading at the level of tissue microstructure". The researchers noted that their findings "add to a growing body of evidence that men and women express distinct biologic responses to brain injury."  The research team noted that they had controlled for sex-based differences in frequency of heading among players. 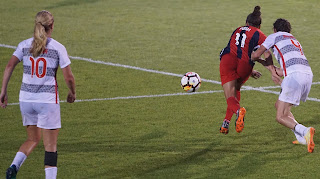 It is clear that football isn't the only sport in which repeated head injuries can have a significant impact over time. And it isn't only boys who are at risk. Parents and coaches of female athletes, especially soccer players, need to be aware not just that girls can suffer from repeated blows to the head when they play, but that girls appear to be even more vulnerable to the effects of such impacts than are boys. The researchers in this study express the hope that, "A focus on sex-based vulnerability to brain injury may inform care of injured athletes and enhance guidelines for safe play." We hope so too.


Photo by Jeffrey Lin on Unsplash

Posted by Yellin Center for Mind, Brain, and Education at 1:00 PM