Why Do Kids Lie?

In this age, when terms like "alternate facts" are part of the common parlance and newspapers like The New York Times feature articles like "Trump's Lies", complete with graphics, it may be instructive to look at why people, especially children, learn to tell lies and what motivates them to do so.

The June issue of National Geographic Magazine contains an extensive discussion of why people lie, in a piece entitled "Why We Lie: The Science Behind Our Deceptive Ways". The article looks at the behavior of both adults and children. Adults may lie to cover up bad behavior, or to inflate their own image, or to gain an advantage over others. Colorful tales of con men, politicians, and outright criminals illustrate these motivations.

But why and when do children first learn to lie? The National Geographic piece looks at the work of Professor Kang Lee at the University of Toronto, who has determined that children of two or three don't generally try to conceal their misdeeds, and they don't consistently lie about having done something contrary to the rules (here, peeking at a toy when the adult cautioned them not to do so before he left the room) until about age seven or eight. This "skill" seems to coincide with the acquisition of two specific abilities - the development of what is called "theory of mind", which enables us to consider the perspective of other people, and what are referred to as "executive functions", which are the abilities to plan, pay attention, and control our behaviors. As these two skills first emerge in children (and executive functions notably continue to develop well into early adulthood) children become more skilled at lying. 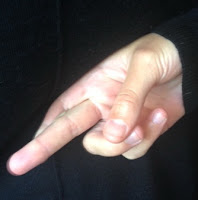 Not all lying is malicious. Reasons for lying include helping other people or avoiding rudeness. But parents may understandably be concerned about children who lie repeatedly, or who lie about things that can be harmful to themselves or others. We've written before about what parents can do when their children lie, and it may be a good time to take another look at these suggestions.
Posted by Yellin Center for Mind, Brain, and Education at 10:53 AM