New Study Looks at Social Difficulties in Children with ADHD

A new research study from Japan finds evidence of differences in the brains of children with ADHD which may be the basis of social difficulties which these children frequently encounter.

Children with ADHD often struggle with inattention, impulsivity, and hyperactivity, behaviors which can impair their interaction with peers. As one student we know with ADHD described efforts to arrange a social activity with other students who had similar difficulties, "It wasn't pretty. One kid wasn't paying attention and didn't realize we were trying to get together. Another decided at the last minute to do something else. And still another guy wanted to come, but had to stay after school since he was acting out in class." But scientists have questioned whether there is more to the social difficulties that children with ADHD encounter, beyond these behaviors.

In the present study, researchers used  non-invasive near-infrared spectroscopy to measure changing blood flow in the brain to uncover the neural basis for the recognition of facial expressions. Being able to pick up on facial cues is an important skill that helps children get along with one another and understand social cues and expectations. The researchers found that while their typically developing control group had changes in blood flow to theirs brains when they saw either happy or angry facial expressions, the children with ADHD only showed changes in blood flow -- and thus response to -- happy expressions. They did not respond to angry expressions. 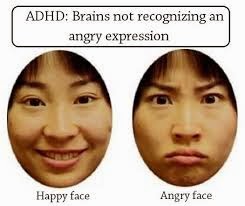 This was a small study (with only 13 subjects and 13 controls) and much more investigation remains to be done. Still, it gives some sense of the neural basis for the social struggles some children with ADHD experience; if you can't tell if your friend is angry with you, you won't be able to respond appropriately and social relations may suffer as a result.

photo and graphics provided under CC license
Posted by Yellin Center for Mind, Brain, and Education at 9:22 AM