Recommended Reads: The Fault in Our Stars by John Green

The Fault in Our Stars by John Green* 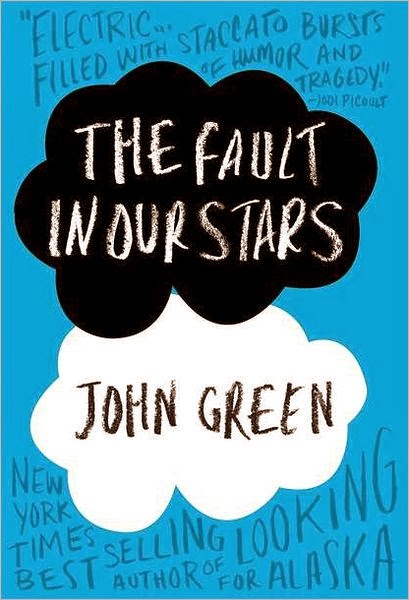 Plot: Adolescence is confusing. Young love is complicated. Hazel, our protagonist, is more intimately knowledgeable about these truths than most teenagers, as a sixteen-year-old with terminal cancer. A last-minute experiment with a new drug is temporarily holding her cancer at bay, but there is no question that she is living on borrowed time. Hazel is constantly accompanied by a cylinder of oxygen. This makes her unusual. But her relationship with Augustus, an irrepressible boy she meets at a cancer support group when he tags along with a friend, leaves her thrilled, dazed, insecure, and giddy. In other words, she’s also just about as normal as they come. The budding love between Hazel and Augustus is, naturally, doomed from the start. But they find wisdom and meaning and, ultimately, peace despite being impossibly star-crossed, and readers will walk away from the book feeling at once sober and joyful.

Our Take: John Green is one of the most admirable authors for young adults out there because he refuses to shy away from, or even water down, some of the biggest and toughest issues in life - not just life as a teenager, but capital-L-Life. Nowhere is this more apparent than in The Fault in Our Stars. A teenager with terminal cancer? Not featured in a sad side story but as the main character? Of a first-person novel? It doesn’t get much more blunt than that. Just as Green plows full steam ahead into territory that’s tough for adults to broach with kids – no matter that teenagers are talking and thinking about it anyway – he doesn’t hold back in making his books intelligent even though they are written for young people. In fact, maybe their intended audience is the very reason that Green’s books are so unabashedly authentic. We love the respect Green shows teenagers by writing books filled with references to Shakespeare and Dickinson (some identified and some subtle), witty characters, sophisticated vocabulary, and big, complicated, abstract ideas that kids will relish wrestling with. The Fault in Our Stars, as well as Green’s other novels, is the kind of book teens will think about. They’ll talk their friends about it. They’ll reread it, and it will guide them in a way that couldn’t be less pedantic or preachy toward the kind of introspection that teenagers aren’t exactly known for. We doubt that Green is even the smallest bit surprised at the sophisticated reactions his novels evoke in young readers, though. He clearly knows that they are more than capable.

To those worried that a book about the tragedy of a doomed teenager is exploitative or relies on shock value for its power, we simply say: Read it, and read it with an open mind. It’s a valid concern at the outset (one that concerned us, we admit, upon beginning The Fault in Our Stars), but this book is a valuable one both because of and in spite of Hazel’s bad luck.

Adult Content: Green refuses to condescend to young readers by skirting the sensitive topics that play roles in their lives, even if those topics make adults squirm. There is sex in this book (it is not gratuitous, and distracted readers might well miss it), Hazel drinks champagne in one scene, and there is some colorful language. Don’t be shocked. Your high school student won’t be.

*the author of Looking for Alaska, which we recently reviewed
Posted by Beth Guadagni, M.A. at 8:15 AM