Ages: High school – will likely appeal more to girls at first blush, though boys will be intrigued once they get past the fact that both protagonists are female

Awards: Listed as a Michael L. Printz Honor Book, shortlisted for the Carnegie Medal, and winner of both the Edgar Allan Poe Award for Best Young Adult Novel and the Golden Kite Honor.

Plot: We’ll just come out and say it: this synopsis isn’t going to be satisfying. That’s because it is critical to give as little as possible about the plot of Code Name Verity away. So what to say? It seems safe to reveal that this is a novel about friendship, more specifically the friendship that blooms between a Scottish girl and an English girl who meet while both are serving Britain during World War II. The Scot is a spy and her best friend is a pilot, both pressed into incredible acts of bravery almost daily in the fight against the Nazi forces. The surprises just keep coming in this book. There is heartbreak, anguish, and cruelty, and there is also humor, warmth, and love. We really can’t give anything else away. Sorry. You’ll just have to trust us, or, failing that, the book’s numerous accolades (see above). 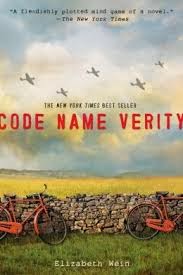 Our Take: Know that this is a heavy book. Some of the scenes are downright harrowing, as it’s difficult to watch characters you love – and love them you will – enduring the ruthless cruelty of war. A further argument that this book is not for everyone is the complexity of its format and plot; the deviously clever surprises that will delight proficient readers will stump those who are less able, making this book a frustrating, rather than breath-taking, mission. Let it be breath-taking. Don’t give it to students until they’ve got the emotional and literary wherewithal to handle it. It’s worth the wait, and they’ll thank you for holding out. Both protagonists are developed admirably, but Julie, the irrepressible Scottish spy, is particularly top-notch, the kind of character that will cause major devastation when you come up for air after a stint of reading and realize that, because she is fictional, you’ll never get to meet her. Parents may wish to read this book before, or alongside, their teenagers, both because it will be fun to discuss the unexpected twists and turns, and simply because it is wonderful.


Adult Content: The wartime setting of this book makes for some gruesome references to violence, but they’re not described in too much detail.
Posted by Beth Guadagni, M.A. at 10:14 AM