Most readers of a certain age will remember Winnie Cooper, the object of Kevin Arnold’s (and many viewers’) long-standing crush on the TV series The Wonder Years. After the show concluded, Danica McKellar, the actress who played Winnie, continued to be crush-worthy off-camera, graduating summa cum laude from UCLA with a degree in math and helping to pen a groundbreaking mathematical physics theorem. She’s devoted to promoting math education for girls and by all accounts is a whiz with numbers, though apparently in middle school she was terrified by math. But then she began to make up “tons of cool tricks and ways of remembering things,” and math began to fall into place. And in her book, Math Doesn’t Suck, she shares those tips and tricks with middle school girls. 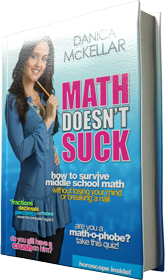 Math Doesn’t Suck is a breath of fresh air. The style is fun and engaging, and McKellar’s tips really are insightful. Girls will be drawn in by the style and held by the substance; they’ll actually want to read chapters of a math book from beginning to end! McKellar explains tricky concepts like the relationship between decimals and fractions, proportions, and percentages in ways that are easy to understand, and provides plenty of clear, interesting examples to give the concepts context. “Step-by-Step” sections provide handy lists of steps girls can use to get through procedures; these pages would be good to bookmark, though McKellar provides lots of memory tricks so girls may not even need to go back and reference them too often. There are also practice problems. The answer key is in the back of the book, and so is a useful Troubleshooting Guide with helpful advice about where to start when you don’t know what to do and lists of useful websites. One of them is McKellar’s own math website, which is available to everyone, whether or not they buy the book. Girls ready to take it to the next level should check out McKellar’s other offerings: Kiss My Math (pre-algebra), Hot X (algebra) and Girls Get Curves (geometry).

An important consideration to keep in mind is that this book is very “girlie,” at least on the surface. The subtitle is “How to Survive Middle School Math Without Losing Your Mind or Breaking a Nail.” Chapters have titles like “Choosing the Perfect Necklace” and “You Can Never Have Too Many Shoes.” This is the aspect of the book that is either brilliant or off-putting, depending on one’s perspective: McKellar uses all of these stereotypically tween-y topics to hook girls, explain mathematical concepts, and make it all feel relevant. “Choosing the Perfect Necklace” starts with a situation: The perfect necklace to complete your outfit is tangled up, so before you can wear you have to straighten it out. McKellar moves, unexpectedly and smoothly, to an analogy about complex fractions, which also need to be “untangled” before they can be used. Similarly, the shoe chapter is not actually about shoes; instead, it introduces the concept of multiples. If you have one pair of perfect heels, you have two shoes, but if you want to stock up and get two pairs, you’d have four shoes. Buy three pairs and you’ll have six shoes, etc. Four and six are multiples of two. Who knew math could be so stylish?

We urge those who bristle at the idea of over-feminizing adolescent girls to take a deep breath and read on. Yes, the headings are written in a font replete with curlicues, and the Step-by-Step sections are each adorned with an image of flowered, high-heeled shoes. But you can’t deny that the book has style – it looks compelling instead of dry. And McKellar has sprinkled in insightful quotations by adolescent girls about intelligence, and information about inspiring women, some famous (Eleanor Roosevelt) and some not (McKellar’s real-life acquaintances who use math to be successful).

In fact, the overall message of the book, which it is nearly impossible to miss in spite of all the pink, is that being smart is more than OK – it’s wonderful. McKellar and her book are living proof that intelligence and feminine style are not mutually exclusive. She seems to want girls to know that they don’t have to choose between being smart and being glamorous, if that’s they want. They can have it all. And they should. That’s a message that’s hard to object to.
Posted by Beth Guadagni, M.A. at 2:41 PM